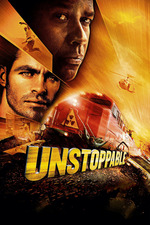 Will Menaker’s review published on Letterboxd:

Two working class heroes stop an airborne toxic event from happening in this tears in my eyes masterclass. So many tears to shed in this one, tears from Denzel and Chris Pine bridging the generational divide to get the job done and love each other, tears from all the beautiful trains, but more than anything tears from the fact that this is the last movie we'll ever see from untouchable genius Tony Scott. No director has ever elevated big budget, popcorn thrillers to a higher art than Scott. His movies always remind me of something my dad said, that movies should *move.* Scott always went for broke, such as the time he used his own money to hire a helicopter to film Pitt and Redford having a conversation on the roof of a building in 'Spy Game' when the studio said it wasn't worth it. One of the great artists of our time.

There's definitely a "The Color of Money" style, passing of the torch in this one between Denzel and Pine, with the older guy teaching the younger that "if you're going to do a job, do it right." Pine's no Cruise, but it occurs to me that Denzel is definitely the Paul Newman of his era. Both are such perfect leading men, who share an easily worn humanity that lets the viewer in on the private vulnerability in otherwise strong, cool, confident characters.

It is in this film's existential examination of "doing the job right" that it expresses a theme that is returned to again and again in American movies: the idea that the truth of the man on the ground, with his hands around the throat of an impending disaster, is always in competition with the truth of the man telling them what to do. The man in the office, the expert, the owner, the general, the man who is up there, while you're down in the thick of it. In this film, it's the shareholders and owners of the railroad company that has already forced Denzel into retirement with half benefits who are "up there" and courting catastrophe.

Will is using Letterboxd to share film reviews and lists with friends. Join here.