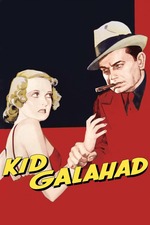 Enjoyable if clichéd '30s Warner Brothers fare about a handsome, cornfed young boxer who eventually appeals to the better nature of a cynical promoter played by Edward G. Robinson. It's predictable stuff ---- you can pinpoint the moment when a spinning newspaper montage will make an appearance -- and the fight scenes often look unconvincingly staged.

Still, it's hard to dislike any film where Robinson and Bogart face each other down in smoky rooms and sweaty gyms, snarling and chomping on cigars. I'm a sucker for that entire lost world of bar room brawls and tough-talking dames. In other words, if you're gonna give me stereotypes, they may as well be stereotypes from '30s Warner Brothers movies.

A young Bette Davis is the real gem here -- she can say nearly any line with conviction and tenderness. She's so expressive, even with the most mediocre of material to work with.