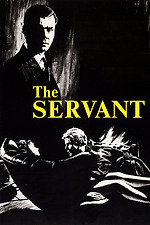 who allowed joseph losey and harold pinter to work together? two psychological sadists making emotional snuff films. I don’t want it to, but the servant is going to stick to me for days I bet: a house full of dripping taps and dead weight human bodies and the same song over and over and over, repeated words losing their meaning as the silences fill up with concrete in that horrific pinter way. a parasitic infestation that isn’t sent to infect you, but instead sucks out all the poison that has been living inside you, benign, and feeds it back to you. a gentleman’s gentleman. self-sabotage, self-disgust, no love in this house just disconnection, and all the rooms are grotesque triangles lit from weird corners so they throw shadows on every wall. that stopped clock in the final shot. I kept checking the time left because I just wanted it to end. a sick rotten conformation of all my worst congealing thoughts.