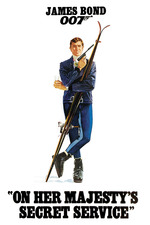 M here again. As you were. OHMSS is a Bond film unlike any other, so much so, it doesn’t even feel completely like a Bond Film at all. Though it features most of things that we have come to expect, OHMSS seems like an attempt to take the franchise in a new direction. It is more heavily character driven than the other films and even the cinematography feels completely different. Introducing a new Bond in George Lazenby and a different spin on the storytelling, OHMSS would go down as a one and done, never to be repeated. What follows is my mission debriefing, I hope you enjoy.

The Opening: Our new Bond is introduced while pursuing this installment’s Bond Girl, Tracy, as she attempts to drown herself in the ocean. Bond stops the suicide and fights off two baddies in the tide before addressing the camera and breaking the fourth wall. Nice to meet you too.

Title Sequence: Probably the most lack luster titles so far. We get some orchestra instrumental and a collection of images from the Connery era.

Casino Resort: Here Bond meets up with Tracy again and we get to see this new Bond’s prowess at the baccarat table. We also get to meet Tracy’s father, the rich and powerful Draco who for some reason offers Bond one million pounds to marry his daughter. Ummm, oh yeah. Women are objects. I almost forgot. So we are still doing that? Cool, just checking.

My Office: I’ve replace the Green Scrambler with the Red Scrambler. It’s a far superior Scrambler. Actually, I dropped the green one and it broke and I wasn’t able to find another green phone. Red will do I think. It has a sense of urgency. Red Scrambler. Yeah, I like it. …………i miss the green one. Here Bond and I have a dick measuring contest but Moneypenny intervenes so everyone wins. We also get to see Bond’s office for the first time. He keeps mementos from his adventures in his desk including trophies from people he’s killed….like a serial killer. You’ll also get to see me playing with my butterfly collection which I’m totally not embarrassed about. Off to the Swiss mountains.

Switzerland: Bond has tracked Blofeld to a clinic on top of a mountain where he is posing as a count. Bond has the idea to go incognito as a genealogy researcher and kilt-wearing homosexual. I don’t ask questions. It’s easier that way. Once in Switzerland Bond is met by Blofeld’s Henchwoman Frauline Bunt and welcomed into the clinic which is full of a group of ethnically diverse hotties. They are there being cured of their food allergies which they can now enjoy. The Asian girl eats rice and the black girl eats bananas. You read that right. My goodness gracious. Bond kills time by fucking all of these racial stereotypes blowing his cover entirely since he was supposed to be gay. Couldn’t keep it in his pants for 5 minutes. Oh well. Blofeld’s plan is to destroy the Earth’s population with a virus since nuclear holocaust didn’t pan out for him. Telly Savalas is awesome. Way better than Donald Pleasence. Anywho, Bond learns the plan and makes his escape.

The Village: Bond escapes the clinic in a great ski chase featuring some notable stunt work. He even goes on one ski and throws some bitches off a cliff. I love the ski sequences in Bond movies and there will be more to come. He meets up with Tracy again which makes no sense and they get into a derby car race before screwing in a barn. Then we get ANOTHER ski chase which ends when Blofeld sets off an avalanche, pretty awesome. Tracy gets captured and Bond runs away.

Me Again: Though you had your one and only dose of me? Think again. Bond asks me to go after Blofeld and I refuse for a second time. Sorry I’m such a bitch in this one folks. Since I’m intent on not being at all helpful Bond seeks out Draco for an airborne armada with which to assault Blofeld’s clinic in the sky without my help which I won’t give no thank you.

The Assault: Bond and Draco swoop in with helicopters and easily fool Blofeld who is supposed to be a genius but is incredibly stupid in this one. Bond belly slides down a curling court and Tracy shows she can take care of herself by impaling people twice her size. Funny Fave Moment: Check out the black guy with the flamethrower who reminds me of Fireball from Running Man. Draco punches his daughter in the face and then blows up Blofeld’s shit while Bond is trying to pursue the bald idiot. What follows is an exciting bobsled chase…..wait, that’s like the 3rd winter sport now. This is more the Winter Olympics than it is Bond anymore. The chase end with BLofeld hanged in a tree and we get a creepy shot of his dangling legs.

Wedding Bells: Yeah so Bond gets married. Yes, that’s every bit as random and peculiar as it is fantastic. I’m invited of course because I’m all over this fucking movie and bring Q as my plus one because we are both socially awkward. I always end up talking about my phone situation or my bug collections and people always just ending up casually moving away from me. The ceremony was quite beautiful but I did not care for the crab because it gave me horrible gas. I was farting all over Q the entire way home. There is a sweet exchange of Moneypenny tearing up and waving Bond goodbye in one of the most beautiful moments from the entire franchise. Bond and Tracy take off and are married exactly 2 minutes before Tracy gets shot in the face. Nice goin’ James. Probably should have just let the poor girl drown in the first place. Didn’t catch Blofeld, she’s still dead either way. I should have just let him quit after all.

Despite all of my sarcasm, OHMSS is an interesting entry to the series and not without a whole lot of charm. Its snowy scenery and set pieces, the music and of course the marriage are all very memorable. OHMSS is certainly one of the oddest Bond movies but I find it to be a welcome change of pace. Though Lazenby doesn’t slam dunk the role, he manages to never ruin it either. Its depressing ending is so out of character for the series, you can’t help admire the audacity of this singular experiment.
As always I thank you for reading and participating in Bond-a-thon and here are the usual statistic from this operation. Consider this mission closed. –M