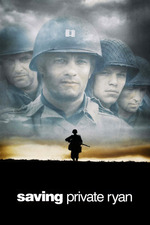 This Ryan better be worth it. He'd better go home and cure some disease or invent a longer-lasting lightbulb or something. 'Cause the truth is, I wouldn't trade 10 Ryans for one Vecchio or one Caparzo.

The war epic “Saving Private Ryan” is known for its Omaha Beach sequence, a harrowing invasion in which American soldiers must travel by speedboat, make it onto shore, and destroy heavily guarded German fortifications so that Allied troops in waiting can get there safely. Director Steven Spielberg thrusts viewers in the middle of the action, from the boat where anxious soldiers vomit due to seasickness, when they are required to jump off prematurely with heavy gears in tow (including their weapons that must not get wet or have sand in them), as they crawl inch by inch among the sand and blood of their colleagues while desperately avoiding an avalanche of bullets and explosions, down to the infiltration of the towers which are perfect vantage points for the Germans.

Although the action is extremely busy, the experience of watching it is clear, transportive, and immersive because the director guides us through every step with precision instead of simply providing a big, amorphous picture, hoping that interest will be born out of violence. Action filmmakers of today can learn a thing or twenty from this picture on how to stage a detailed, thrilling, suspenseful, and horrifying sequence. And then make it so that there is gripping entertainment to be had behind the violence.

Also notice that although we have not yet engaged meaningfully with any of the key characters, we care about what happens to them. By effectively placing us amidst the pandemonium, we cannot help but to see ourselves on screen. The soldiers’ survival is our own, in a way, because what is a more effective tool than to envelop those looking in using an urgent, blink-and-you’ll-miss-it life or death situation? It is masterful filmmaking.

Less known about the picture, however, is its high level of thoughtfulness. The plot involves Captain John H. Miller (Tom Hanks), along with his seven chosen men (Edward Burns, Tom Sizemore, Jeremy Davies, Vin Diesel, Adam Golberg, Barry Pepper, Giovanni Ribisi), being assigned by those in charge in Washington, D.C. to find Private James Francis Ryan (Matt Damon) and send him home because three of his brothers have been K.I.A.—killed in action—all within the same time period of one another. But the plot is not what the film is about.

It is about the value of life, how its value varies depending on the character we have in front of us. It is beautiful, for instance, how we can look at Pvt. Reiben (Burns) one way, who gives off a certain devil-may-care attitude when simply hanging out with the boys, but our idea of him is challenged when heavy artillery are flying in all directions and there is little hope to be had. He stands in the face of danger, willing to save the lives of those whom he has found himself at odds with not even a day prior. No, it is not just because it is his job. Because we go on a long journey with him, we come to understand that he cares—and probably cares more deeply than some of the others in Captain Miller’s company. Pvt. Reiben is one of eight.

Another equally interesting specimen is Pvt. Upham (Davies), a translator who admits to having not fired a weapon since basic training. He spends his days in front of a typewriter. It shows: he is thinner than the other men and those eyes coruscate with idealism. His body is in the battlefield. But his mind isn’t. He still believes there are rules in war. In a way, he is right. And there should be. But in other ways, he is dead wrong. And he will learn the cost of being merciful at a time when it is probably more prudent to exercise a level of… certainty.

Surface viewers will likely consider Pvt. Upham to be weak. I do not. I think he is a poet playing soldier which may come across as weakness at times. I’d love to hang out and discuss books and politics with him, but I would not rely on him to watch for my back when the enemy is at the door. I admired screenwriter Robert Rodat’s complexity of characterizations.

And then there is Capt. Miller who must apply a blanket of calm and patience amongst his men who consider their urgent mission to be illogical. Hanks plays a master compartmentalizer, revealing moments of vulnerability only through the eyes. Capt. Miller’s right hand begins to shake uncontrollably from time to time; his men see it but they do not ask or say anything about it. Look closely, however, that they may have an idea about what he’s experiencing (they may be experiencing it themselves) and so sometimes, when they can, they tend to return the calm and patience he provides to them.

This fits into the story’s recurring theme about life’s pattern of give and take. This movie is littered by transactions, subtle and overt. And those who pay close attention will appreciate that such is life in a nutshell. The story here just so happens to unfold in the battlefield.