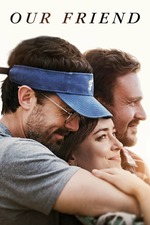 Gabriela Cowperthwaite’s “Our Friend” provides a Hollywood portrait of cancer. And so when Nicole (Dakota Johnson), two years into her terminal diagnosis, looks in the mirror and claims, “I’m so ugly now,” we don’t believe the words or the emotions behind them. We are simply watching a performer portraying sadness while looking absolutely luminous underneath the pale makeup; her face is pallid but her arms and legs are well-moisturized, spotless.

If you know somebody who is, has been fighting, or did fight against cancer, this movie will feel like a total lie because it fails to show what cancer does to the body, from the rapid weight loss or weight gain due to the combination of drugs that must be taken (their side effects), the sores that break out all over the skin or ulcerations in the mouth and other soft tissues, how getting up from the bed feels like climbing a mountain, down to the sheer exhaustion that results from walking a mere ten feet away. We need fewer movies like this: cancer as tearful entertainment.

Perhaps the film’s glamorization of cancer has something to do with the fact that it is based on an Esquire magazine article by Matthew Teague, Nicole’s husband. Nicole died in 2014 at the age of thirty-six. Its idea of respect is hush-hush and tiptoeing around the fire, to show illness around strategic cosmetics, careful editing, and hopping between 2008-2014. Notice, for instance, how vomit is shown on a nightgown but never the act. Why is that? Because showing the act portrays the disease as something powerful, visceral, and ugly. There is irony here because telling the truth is paying respect; telling something else is at the very least a disservice to the life that was.

An argument can be made that the picture need not show cancer for what it is because the work is not really about the person who is sick but rather the big-hearted friend who sacrificed his career, relationships, and a whole lot of time, energy, and money to help care for her. His name is Dane, portrayed by Jason Segel, and he is best friends Matt (Casey Affleck), a journalist with a passion for “telling stories that matter.” But I say a convincing drama needs to be strong on both fronts because if one is a half-truth, the other does not have a leg to stand on. While there is nothing wrong with Segel’s performance—in fact, Segel, Johnson, and Affleck deliver highly watchable performances—the character is nice, kind, patient, and understanding nearly all the time—which makes a very dull Dane.

As mentioned earlier, the work jumps in and around 2012. We are met with white texts like, “Two years before diagnosis,” “The year of diagnosis,” and “A year since diagnosis.” One minute we are watching Nicole with long, shiny hair blowing in the wind and the next she is sporting a headscarf. (She is never shown bald from undergoing chemo because that would look ugly, you see.) I found that the years prior to the diagnosis are rather pointless outside of some expository background information prior to the meeting of Matt and Dane. But the screenplay by Brad Ingelsby insists of going back to the good old times in order to remind the audience the terrific time that was and how far the Teagues have fallen into depression. I found the charade to be sick, manipulative, and distasteful.

Somewhere within its interminable two-hours, I couldn’t help but wonder why this story needed to be told because it lacks a specific angle, a quality that makes it special. I know someone who has cancer, and you probably do, too. And so why aren’t their stories being told on film? This movie reeks of privilege; it is cloying, sentimental, fake, and sanitized. Do not be fooled.

Why are we as a society so embarrassed to show a disease exactly for what it is?