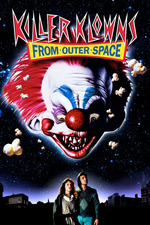 Hello and welcome to Hoop-Tober. Thank you to all of those participating. I am floored by the response and am excited by the amount of interaction between members both old and new.

Horror films in the 80's birthed a prodigiously talented roster of creative film professionals into the world. Frank Darabont, Dean Cundey, Kathryn Bigelow, Renny Harlan, Shane Black, to name a few, all started in or got their break in horror films. Many of them transitioned into more respectable fare in the 90's and beyond and helmed numerous blockbusters and Oscar winning films. For most, but not all, their talent was evident even in the lowest budgeted 80's horror's.

In the earliest years of the decade a trio of brothers started a company that had a hand in many iconic 80's fantasy film moments. In pics like The Sword and the Sorcerer, Vincent, Critters and Pee Wee's Big Adventure they utilized every type of special effect from puppetry to matte paintings to create fantastic and unique film sequences. By 1987 Steven, Charles and Edward Chiodo had built up enough currency to secure two million dollars to make their first feature film: The whimsical sci-fi/horror homage film Killer Klowns From Outer Space.

Starring Grant Cramer (Hardbodies) and Suzanne Snyder (Weird Science, Remo Williams), Killer Klowns, while successfully following a basic three act construct, is much more style than substance. The jumping off point is a comet/asteriod/shooting star that the two leads see one night at Snog Mountain and decide to follow. What they discover is so far out there that of course no-one believes them. (Hint: There are Klowns)

Performances are at times comical and one dimensional but that seems to fit the tone of the film. The fantastic Royal Dano has an extended cameo and John Vernon is as much a grand ass-hole as ever but they are not what you are paying for here.

The production and character design, effects and costumes are outstanding. The Chiodo's create a ridiculous, colorful and detailed world that is built around every clown/circus-cliche/image that you could think of. Humphrey Bogart once famously said 'If I ever have exposition to say, I pray to God that in the back of the shot they've got two camels fucking.' While there are no camels here, There is so much to look at that it gets you through sketchy dialogue and awkward beats. The Mr. Bungle meets poor-man's Green Day score is also a plus.

The Chiodo brothers, while they went on to work on projects like The Simpson's, Elf, Freaked and Team America, never really got another crack at a feature film. There is and always has been talent evident in the work they do, and I could never understand why a big break opportunity never came. Rumor's have been swirling for years about a KK sequel but nothing concrete has materialized. The film is not perfect, but it is clever (including a nice twist on the Romero zombie kill method), fun and fantastic to look at. There aren't many films released each year that you can say 'I've never seen anything like that before'. This is one of them. It is a film that truly earned and deserves its' cult status and hopefully won't be the only shot the Brother's Chiodo ever get.

Day of the Dead