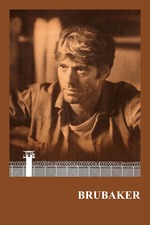 Stuart Rosenberg returns to prison, where he had his greatest success with Cool Hand Luke, to loosely adapt a true story of a penologists tenure reforming a problematic and venal prison farm. The farm serves as a prison, and as a source of income for the state.

Robert Redford is Brubaker, a man brought in by his states prison board to observe and take over Wakefield State Prison. The prison is overrun with vermin, graft, abuse and is in a state bordering on shambles. He enters the facility as an inmate, and finally reaches a point where he makes himself known and dismisses the unscrupulous current warden. The facility makes due with several inmates occupying administrative and guard positions, which in conjunction with a prison board occupied by several crooks, makes Brubaker's job very difficult. It is a perfect roadblock of institutionalized corruption and a corrupt institution.

The cast, while not necessarily considered all-star at the time, certainly is in retrospect. Alongside a steady Redford are Yaphet Kotto, David Keith, Matt Clark, Everett McGill, Joe Spinell, Brent Jennings and Morgan Freeman (in his first role) as prisoners of the farm, and M. Emmet Walsh, Murray Hamilton, John McMartin and Jane Alexander as various board members, politicians and outside influences. Kotto and Hamilton are real standouts, as is Freeman in a small but showy role.

Working from a script by W.D. Richter (Buckaroo Banzai!!), director Rosenberg handles small moments and action well, and is, as he has always been, an actors director. The first half hour is incredibly impactful, but the rest of the film holds its' own as we begin to follow the real story.

In one of his first screen credits, legendary production designer J. Michael Riva creates an outstanding look to the prison facility and the nearby homes and diner. TV composer Lalo Schifrin provides one of his best film scores, and noted French cinematographer Bruno Nuytten creates some beautiful sequences.

There have been plenty of nasty prison environments depicted in film since the release of Brubaker, but that still doesn't take the sting out of the opening, nor detract from the specific misdeeds unique to this story. Overall, it still hold ups very well as an exploration of corruption and prison environment, while displaying solid work from all creative departments. Though not his last film (he officially made two more), this effort makes for a nice bookend for Rosenberg, along with Cool Hand Luke, of a career that was long on craft and fun but short on recognition.

When Jews Were Funny