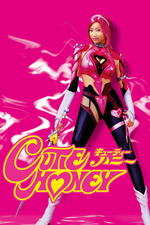 Now THAT’S how to do a comic book superhero movie. Total live action cartoon full of bizarro touches and cheesecake, it’s genially sleazy in an old fashioned pin-up kind of way but maybe 1/10th as perverted as the original Go Nagai manga. And the costumes and effects and villains and songs are all delightful.

But man, it’s nice to see a Hideaki Anno project that doesn’t smack of massive depression. I’ve been on a bit of an Anno kick, finally powering through Evangelion and reading Insufficient Direction, so it’s fun to see him so happy. Can’t believe it took me so long to see this.