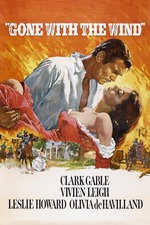 As a first time watch in 6 years, this practically felt like a new experience, and it seemed only fitting to rewatch it in theaters. Seeing it in the theater was the best justice I could’ve given this movie because it made the experience much more epic and grand. That’s what Gone with the Wind is, an epic. I reminded myself numerous times while watching that it was released in 1939, and it’s as if it was more of a surprise every time. I still can’t believe it! Watching the many scenes with silhouettes, hearing the beautiful score, and the scenes involving the Civil War were especially the biggest pros of seeing it in theaters. I liked one particular shot where Scarlett is searching for the doctor and it just zooms out on her walking past thousands of wounded or killed soldiers. I even noticed a few “dummy” soldiers which oddly enough made me appreciate the scene more.

It’s impressive to me that a movie with a character as dislikable as Scarlett can still be so good. Read ahead for some spoiler thoughts, but before that, I gotta acknowledge the final shot before the Intermission and the final shot of the movie 😍👏😭
p.s. I love me some Thomas Mitchell

(Spoilers ahead)
I want to say Scarlett has great character development or even progression, but she really doesn’t. I think her peak is just before the intermission and just after, but the movie ends with her still being a spoiled brat. I’m kinda glad she doesn’t get Rhett in the end (although it’s a bit ambiguous).