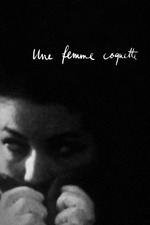 Godard's first film was made in Geneva when he was twenty-four years old. Thought to have been lost, it resurfaced in 2017, showing up on YouTube without warning nor fanfare. Technically, it's as you'd expect. It looks like a long-lost short film by a debutant director and amateur actors, though there are a few nice shots here and there. We see Godard's interest in representing the written word on screen and his obsession with language.

It's based on a short story by Guy de Maupassant, entitled The Signal. In that story, a married woman observes a prostitute attratcting potential clients by using subtle signs. She decides to intimate those signs and gestures and attempts to do the same, and is successful. Except, she doesn't quite know what to do when she is successful, and her actions result in dire consequences. The story is regaled through her telling a friend.

de Maupassant's short story deals with weighty moral and philosophical issues, though in a pithy and whimsical way, and it's not really clear whether he was even particularly interested in said issues in this story. That Godard chose to represent The Signal for his first cellular venture leaves a few questions. There is an argument to be made that this is a film made with feminist perspectives in mind, but I think this is a bit far-fetched. Ultimately, a woman is raped and it is presented as her own fault, and it is also presented that she believes it is her own fault. If this is an attempt at parody, it's not really apparent, though I suppose this is Godard's first film and it's easy to excuse clumsiness, though I'm not convinced in any way that this is supposed to be a parody.