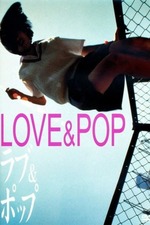 The bubble has burst.

Japan's economic boom of the 1980's has long since passed, but the ramifications of the rapid expansion and technological development the country underwent still remains. Tokyo is one of the most densely populated cities in the entire world, with a staggering amount of financial capital concentrated in a shockingly small amount of space. It is the most monolithic of monoliths, all the towers and skyscrapers and monuments to the excesses of capital prosperity casting their shadows until all the light of the sun is totally blotted out.

Among these many shadows, in this Lost Decade of Japan's modern history, people still remain. A country stuck in an economic rut sees its problems cascading down among every aspect of it's society. Job prospects gradually slim, the birth rate declines, and expansion slows to a crawl, the pearl of prosperity trapped in the oyster shell of economic impotence.

Hiromi has spent the majority of her waking life as a witness to a world where her future seems to ever further out of reach. Her parents have found success and stability in the boom of the prior decades. Her friends have found goals, dreams, and a path to self-fulfillment. All Hiromi knows how to do is to live in the moment, and in this moment, Hiromi has nothing except her body and a camera.

This lost child in this Lost Decade searches for value, for a purpose to her aimless days and for something she can truly call her own. Hiromi is the only capital Hiromi has, but she still wants to grasp the pearl (or in this case, topaz) of prosperity that her generation has been robbed of. It should be easy after all; Hiromi is as resilient as she is resourceful, and living in the moment, good or bad, means that she can always be certain of when the next moment will come.

Compensated dating is civil term for prostitution, but the pretense of civility can't hide the exploitation it propagates. The money Hiromi debases herself for is a pittance to the men who take advantage of her and her services, the violation of her body and her soul actualized through the most wretched of transactions. Hiromi's attempt to take agency in her moment is doomed to fail in a culture that prides itself on conformity and collectivism, where her own identity is shaped by external desires for capital gains over the intrinsic value of her self-worth. It is gross, so so gross, to see how the world spits in her face for daring to climb the ladder in her own right, to take advantage of a culture engineered to reduce human beings to wealth generators in the endless grind of capitalism.

Love & Pop is a lucid nightmare, the kinetic camerawork indulging in a kaleidoscopic portrait of a Tokyo that feels like a warped vision of the great silent City Symphonies. Where our cinematic forefathers saw the potential for growth in urban expansion of the 1920's, Hideaki Anno sees only claustrophobia in the stagnation of the modern era. Skyscrapers crowd among each other, electrical wiring threatening to strangle the very sky above, thousands of disparate narrow sidewalks and roads shoving millions of faceless people into the same path of endless, pointless labor. The shadows of the city only grow larger by the day, even when the buildings grow more hollow; how long until we can't see anything at all?

Hiromi was alive on July 19, 1997. It doesn't matter whether a "real Hiromi" exists or not, because the life Hiromi led was one that someone lived. As long as humans are treated like meat, churned through the gears of a heartless and senseless economic system, humans will treat themselves like meat.

Hiromi is alive today, in countless cities and towns all over the world, chasing the dream of beauty the pearl offers.

The only thing that's real is the suffering she'll face along the way.