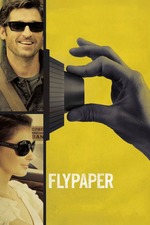 You know what they say. Normal’s just a cycle on the washing machine!

Flypaper starts off as a bank heist/crime whodunit, with a cast of unique characters & intriguing plot twists. 2 teams of bank robbers come to the same bank at the same time for different heists, the professionals come to steal from the vault and the amateurs are there to steal from the ATM machines. But unfortunately it falls a little flat and has a predictable ending.

It does have one or two little surprises along the way; such as what happens to Darrien (Mekhi Phifer), that is something I simply was not expecting.

I generally like Ashley Judd, but this was a nothing role for her. She is completely forgettable as the bank teller Kaitlin. Patrick Dempsey on the other hand is over the top as Tripp a bank customer who is caught up in the heist and tries to sleuth his way through the situation whilst hitting on Kaitlin every chance he gets. His character is annoying & sort of neurotic. On the plus side he did manage to shake off his Grey’s persona as he is not McDreamy like AT ALL in this film.

The thing that annoyed me the most was the multiple explosives, they would have been heard outside of the bank! How did no one come to investigate that?? Grr

I probably would not watch this movie again, but I would recommend it for a drinking game – if you drank every time someone dropped the f-bomb you would get very hammered by the end of this film