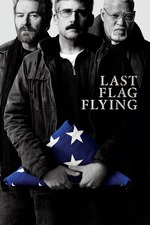 I say this as a big fan of The Last Detail, but this definitely works better if you pretend that earlier film doesn't exist--not because of a drop in quality, necessarily, but because the characters and backstories have been tweaked just enough that it's probably an unnecessary distraction if you go in thinking Cranston is going to do a Jack Nicholson imitation (although he sort of does), et al. For those who have done that, this is a deeply melancholic, largely conflict-free film, which is kind of bemusing given that it's dealing primarily with three US Marine Veterans and the scars that have been left on their lives by the wars the US army has been involved in. However apart from a couple of (surprisingly abrupt) moments of tension at the end of the first act, when Steve Carrell's Doc is receiving the body of his dead second-generation marine son, who may or may not have died heroically in combat, what this is is a conversational movie. Men in cars. Men on trains. Men in diners and hotel rooms, talking and telling stories and trying to come to terms with their lives and come to terms with their place in the world. Atone for their lives, perhaps, and move on at the same time. It's angry, but it's not raging, and except for a couple of minor moments that play a little too cute (the conversation between Fishburne and Cranston about Eminem, for example) it doesn't make many misteps. Or it played me like a fiddle. Either way.