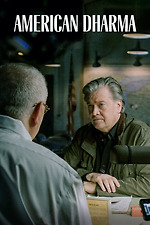 American Dharma is not a platform for Steve Bannon. It is a crucible.

Empathy is the greatest tool of an artist. It can be a great healer. It's also a deadly weapon. Empathy can cut through the armour and mystique of delusion in a way that cynicism could never hope to match.

Errol Morris is one of the best filmmakers of all time. In his documentaries he wields empathy like a surgeon. He cuts to the very marrow of his subjects. Opens them up or makes them comfortable enough to open up in a way that is more revealing than any cynical 'drumming' or confrontation. His skill isn't in cornering his subject but allowing his subjects to corner themselves.

In this film Morris turns an eye to the controversial political figure (to say the very least) Steve Bannon. A figure connected to the rise of President Trump.

Steve Bannon sees himself as a man of duty, a man of dharma, but who contradicts his beliefs and compromises his ideals whenever it is convenient. He says he represents pragmatism and rationalism but peddles and indulges in irrational terror. His entire ideology based around a fiery, inevitable war to end all wars. He claims he doesn't want to be involved in frivolous combat, but in his life revels in creating strife and divisions. He plays predator to people's petty fears and exploits them to service empty rhetoric and corporate masters. He claims to want to throw off the elite while at the same time is comfortable bowing and scraping in golden buildings and private jets. He sees himself as companion to the crown, a tragic Falstaff to Henry V, serving the will and ego of billionaires. He wants to save the common man but idolises screaming idiots who harass protesters for daring to strike back at mass economic corruption. He turns a blind eye to violence and the murder of innocents by political extremists as 'inconsequential' but cowers in fear from refugee children. Bannon preaches the issues over controversy, only in the next breath to normalise controversy. Bannon sees tangent as rebuttal. He sees entertainment as enlightenment. He comes off less as a revolutionary and more as a man who would spit in the wind and then claim it is raining.

Bannon (like many people in politics) is always attempting to craft delusion out of the truth. Watching this documentary I think Bannon's most successful grift is with himself. Bannon is what Orson Welles called a "Shut-Eye". The term Shut-Eye is used by con-artists to describe someone who pretends to have psychic skills so much that they begin to believe they actually are psychic.

As Morris digs deeper into Bannon, the more you learn the less you see. Until all that is left is a charade of symbolic gestures and movie references and catch-phrases. All sound and bluster, but empty. Hollow. Even Lucifer himself is quoted in a glib manner.

Bannon is obsessed with media because he sees representation as more real than reality. Fantasy as more important than life. That he was galvanised by celebrity leaders like Reagan and Trump is no accident. He admits as much. In doing so his character is slowly revealed as a patchwork Frankenstein's monster of stitched together beliefs, working towards and servicing empty rhetoric more than goals. Symbolic victories over actual victory, because to him they are one and the same. Damning the consequences, even if they cost him everything he claims to be fighting to protect.

Watching this film I felt like I was watching an episode of Mindhunter. Like I was sitting in a room with some lizard as it slowly peeled off a human mask. And after seeing the controversy surrounding this film I was reminded of a line from Mindhunter where a serial killer says "There are others like me, out there."

I think the truly terrifying thing about Bannon is that he is far from alone. I think that many so-called political commentators are every bit as aligned and in service to empty rhetoric and symbolic gestures as Bannon. Every bit as delusional and dedicated to fantasy at the expense of reality. Every bit as willing to destroy what they claim to protect in the mad, drooling pursuit of headlines and hyperbole.

How else to explain the call for the censorship of this movie coming from people who in the same breath proudly announce that they have never seen it? To them Steve Bannon is not the weird, awkward and blustering contradiction seen in this film. To them Steve Bannon is only a cartoon supervillain with the power of hypnosis. He is Rasputin the Mad Monk. By merely being exposed to his presence and ideas is to be corrupted by them. Of course the same people saying this spend all-day and every day knee-deep in the very worst of extremist political commentary. Spreading the ideas of men like Bannon and his cohorts to hundreds of thousands of followers all over the internet. Quoting them. Tweeting them. Every minute. Every hour. For years. By their own actions guilty of disseminating and promoting the very same evil that they would censor in a heartbeat. Every news channel and every newspaper in the world has given massive platforms to men much worse than Bannon. And yet they are not censored. Twitter has given platforms to bigots and much, much worse. They are not censored. In the context of the real world the attack against Errol Morris and this film is pointless. Empty. Fake. A symbolic fight that services nothing but the silencing of one of our best artists. It is anti-intellectualism.

I have seen a few people condone censorship of this film under the idea that: "Freedom of speech is not freedom from consequences!"

This odious comment is as shallow as it is manipulative. Just because actions have consequences doesn't mean all consequences are valid or moral. To believe otherwise is to become Steve Bannon. A person who compromises everything in service to empty, self-aggrandising delusions.

Listening to a person is not the same as justifying their actions. It is not giving legitimacy to 'both sides'. Bursting the bubble that this fellow is some Machiavellian architect or Doctor Doom is not only healthy, it's necessary. The manufactured mystique of Bannon is every bit as delusional as Bannon's perspective of himself. Perpetuating that delusion is toxic because it decontextualises political events from reality. It makes it impossible to learn from them and grow and change. American Dharma reveals Steve Bannon as something much worse than a cartoon Svengali.

And I fear he is barely the tip of the iceberg.