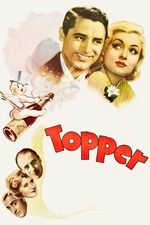 Topper is a solid supernatural comedy that is given a large dose of charm by Constance Bennett and Cary Grant. Roland Young is also quite good as the timid Topper, who Bennett and Grant's freewheeling ghost couple take on as a project to get themselves inside the pearly gates.

There isn't a whole lot else to distinguish the film. There really isn't much in the way of narrative urgency. Some of the writing is clever and there are a few well-orchestrated comedic set pieces that are very accomplished, but the film, as a whole feels a little disjointed. Part of this is due to the strange decision to make Grant's character vanish (See what I did there? He's a GHOST!) for a large portion of the film's second act.

All-in-all, Topper is definitely worth checking out. Just know that some rumors of its greatness have been slightly exaggerated.