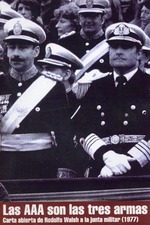 A montage of denunciations extracted from an open letter, with one of the greatest overhead shots in cinema in which mate passed around by filmmakers of Grupo Cine de la Base becomes like a chalice for knights of a round table. Accompanied by the melody of Piazzolla's tango, this simple act of sharing crystallizes itself into the temporality of the closing line: "I will bear testimony during difficult times."

Rodolfo Walsh's open letter to the military dictatorship of 1976 was the Argentine equivalent of Zola's J'accuse. But in this instance, the writer was violently assassinated. An act that was one of the thousands of crushed personal histories in Argentina, from an era in which the perpetrators managed to derail a people's will to resist imperialism.