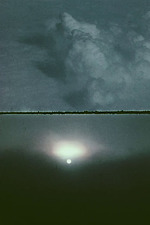 Accompanied by introductory shots of cloud-filled skies, mountain ranges, and sunsets and sunrises, the soundtrack of this experimental film begins with a conversation about the state of Peru and the policies of its then president. The unnamed Juan Velasco who took power through a military coup in 1968. In recent Peruvian history, Velasco is notable for agrarian land reforms whose intentions were encapsulated in the final exclamation of an address to the nation in which Velasco quoted Andean revolutionary Tupac Amaru II: "Peasant, the boss will no longer eat out of your poverty!"

The year of the address was 1969, and Robert E. Fulton's film dated in 1972 may have been filmed in-between those years. The 1960s and 70s were pivotal decades in world politics, and the consequences of its shifts and endings haunt the optimism communicated at the beginning of the film. Inca Light, though not a diligently political film, inadvertently traces the shortsightedness of the reforms. Freed from an attachment to the land that was latifundial and colonial in nature, many of the campesinos sold the lands assigned to them to make another start in life in Lima. Inca Light's montage traces this relocation in reverse, from the coastline to inland, following the bodies of the descendants of the Incas in the capital city of Peru to the capital of their ancestors.

The first shots capture new places of Lima in the beginnings of what contemporarily are its shanty towns, the other edifices of capitalism, and in the case of Peru, the symbols of the racial caste of internal colonialism imposed on those of Andean and mestizo backgrounds. From Lima, the increasingly accelerated montage moves to Cuzco, all the while reiterating the film's introductory shots, and supplementing them with shots of locomotives, human faces, dogs, llamas, alpacas, bugs, leaves, and the most infinitesimal parts of nature. It all finally culminates in shots of Machu Picchu and the skies above it. But Inca lights, that is to say, the Inca spirits of the living who were registered on the celluloid through light, will not crumble after centuries like so many monuments. In their ephemerality, they will instead haunt of futures canceled by the most egregious forms of white supremacy and capitalism and films such as this one allow us to contemplate them.