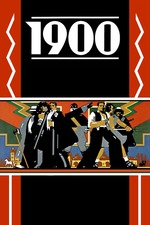 There is to be no compromise with Fascism, it must be fought and ridiculed at every congregation and at every point of origin. And for that 1900 is something of a glitch in the grand film epic apparatus. A detournement, if you will, of the European auteur prestige film for which most critics reserve praise the more didactic (usually leftist) politics are subverted for the sake of the filmmaker's personal vision. There is an underlying moral message despite all the Bertoluccian signifiers and 1900's ridicule of cinephile memory might be the point of entrance. Inadvertently or not, this ridicule through evocation is most clearly aimed at the Burt Lancaster of Il Gattopardo, and then, to lesser degrees, the Sterling Hayden of Johnny Guitar, the Laura Betti madwoman archetype of Italian Cinema, the Robert De Niro of The Godfather, etc. Again, inadvertently or not, the peasant led coda is more staunchly and effectively Maoist than several 1970s films that claimed to be Maoist. This part, titled “25th of April 1945, Liberation Day,” is like a neorealist agitprop segment in what is otherwise a collection of allegories that replay the following truth: the bourgeoisie will give rise to Fascism and then maintain it in order to save itself as a class.

Introduction to Arnold Schoenberg's Accompaniment to a Cinematic…