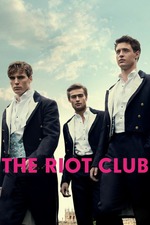 Negativity?
There seems to be a lot of undue negativity about this film, apparently because it’s about a bunch of toffee nosed posh cunts. Why? So what?

It’s created a Sleeping Beauty type effect where a good film has been misinterpreted and taken as some sort of personal attack? I’m common as muck me, but I never felt threatened by these upper crust shenanigans, despite being a subordinate labourer, just as I never felt threatened by Sleeping Beauty or Sucker Punch even though I'm a man with a dick and a ball sack full of spunk. The Riot Club isn’t propaganda for feudalism, just as Sleeping Beauty isn’t an advert for sex work and Sucker Punch isn’t pro-rape. It's not personal. Gnome sane?

The Blow Job
The only major negative thing about the film is the ridiculous blow job scene, where pretty boy is supposedly being noshed off by a ginger tramp. The gigantic lunges and the lack of gagging and squelching noises aren’t even simulation enough to suggest your man has a cock like a long length of Spanish or your one has a bucket throat. The girl is only in the film for a few seconds and her job of giving a chap the eye and pretending to suck his cock was 50% blundered. *Wags finger in the air* “No bueno.”

The second act changes tone. Becoming cringeworthy and a little uncomfortable to view, in a way that effectively demonstrates the distinction between these upper class boys, and the posh middle class diners and workers around them. I didn’t enjoy this section of the film as much but I still laughed more than all the other folk in the cinema.

The film ends abruptly. But after consideration I thought this was for the best. No film should ever be bulked up with filler, it’s tedious. It’s better to be left wanting more. The ending also didn’t go as I expected it to, so that’s another party bonus right there.

Dessert
Apparently posh people call their afters ‘pudding’ and middle class folk call it ‘dessert.’ I call it ‘afters’ and as a youth would ask my mum, “is there owt else?”
To which she would reply, “No there bloody isn’t. You’ve had sufficient! Stop being so bloody greedy! You eat me out of house and home you kids! You’re ungrateful! I'm bloody sick of it.”
I wasn’t aware of this British distinction. But now I know. It's a little indicator of why I think of myself as English before British I suppose. My point, referring back to the undue negativity, is: if a pleb like me who thinks pudding is a pie made with suet and calls it his afters, can handle a film about Oxbridge wankers without taking offense. Why are some posh middle class sumbitches taking offense to this toffee nosed behaviour when they’ve already got a pony? *Wags finger in the air* “No bueno!”

British
Finally. Shortly after 55% of Scotland surprised me by voting for dependence. Choosing David Cameron as their wet nurse. It felt very apt and nice to watch something quintessentially British. Something that didn’t try and suck America’s cock. Something … jolly good, old chap! And it has a Scotsman in it that sings that god awful national anthem! *Points finger and grins* "Warghhh!"