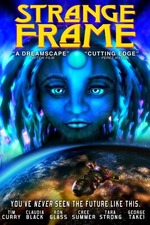 I have mixed feelings about this one. On the one hand, I loved a lot of the animation. There's almost always something interesting to look at on the screen with this always-busy cut-out psychedelia. Creativity's on overdrive as you've got all these odd-looking characters, some which would have fit right in among the Mos Eisley cantina crowd. Always delightfully odd, this is a real visual feast.

A little of that goes a long way though. It took my senses a little while to get used to what was going on with this thing. Once it did, I enjoyed it all for a bit. Eventually, however, I kind of got tired of things and just wanted it to end. I think if the characters were a little more interesting, their voices a little less grating, or the story anything worth paying attention to, it would have helped. I also didn't care for the music, none which sounded like it could come from the 27th Century. I also imagine some people who would actually enjoy this animation style for the full 90+ minutes would be turned off by the genre. This isn't just science fiction. It's really hard sci-fi. Since there's not much originality in the storytelling, at least not the originality you'd expect from a psychedelic sci-fi lesbian musical, that will make it difficult viewing for people who aren't into sci-fi or adult cartoons.

This is worth seeing for fans of creative animation, and it's the type of labor of love that really does make me want to see more work by director G. B. Hajim.

My daughter Emma recognized the voice of this little monkey character as the same person who voiced one of Clifford the Big Red Dog's friends. Indeed, it was the prolific Cree Summer. Unfortunately, that monkey was one of the characters with a grating voice. Tim Curry, Martin Landeau's daughter, Alan Tudyk, and George Takei also provide voice work.