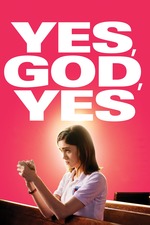 Can't believe I bought this film on Vudu. Really just a spur of the moment buy. I knew it was a comedy, and I like Natalia Dyer in 'Stranger Things', so I got it.

What a good decision, and what a great film. I was looking for something original on the streaming service that I'd not yet seen. 'Yes, God, Yes' is original, fresh, with belly-hurting humor.

I actually attended a Catholic College: Belmont Abbey College, in Belmont, North Carolina. I'm not Catholic myself, I just did it out of convenience. Well, I encountered various, I mean various cultural differences with the school--to the point that I was expelled. For one instance, my room was searched weekly for alcohol, but, also....CONDOMS. Yes, if RAs found condoms in my room, they would take ALL of them.

Us "Dormies" couldn't even have condoms. It was segregation: SOME COULD SIN, OTHERS COULD NOT.

The ones doing all the sinning without getting expelled, well, they were rich; "Mommy and Daddy" knew the dean, who knew the board-members, so on. I came up in a trailer in the asshole of Gastonia, North Carolina; then came up in the "Hood" of the city for a few years. No leverage coming from where I'm from---you deal with it by staying out of people's way.

Yet, hypocrites are quite predatory in wanting to blame their own demons on others, as to keep them hidden and to have a proper Scapegoat. I'm still haunted by that Catholic College to this day. Oh, yeah, I need to add the fact that I was hazed as well; by a group of suburban slobs.

Watching this film gave me so many flashbacks of those days, and even some of my high-school days--(which may have been worse than the Catholic College). Although from a female perspective, with Natalia Dyer's character in the story, there are some universal themes, situations, and plot-points that should strike any viewer above the age of 16...

This isn't a film for girls or guys, or kids or adults; it's a film for human beings struggling with morality, lust, and sin itself. The parody and satirical nature of the movie is done so well that it brings into question what it means to be a human. What it means to be a Christian in modern American society; with the world ever-so changing.

The story takes place many years ago, during the time of the original "You've Got Mail" 'AOL' chats in the early 2000s. Many people may find this movie distasteful, especially devout Catholics; yet anybody with any film-sense will get what the message is, what the overall point of the motion-picture is.

There's no subliminal, lecherous, or sexy message about 'Yes, God, Yes'. It deals with serious issues with a somewhat heavy comedic tone. The seriousness of the issues tackled is what makes the humor work.

This isn't some big-budget rom-com exercise---this is legitimately a great script, story, and execution on the behalf of the writer/director Karen Maine. Ms. Maine has given us a well-thought out film with such in-depth commentary, and self-awareness that it's utterly brilliant. I laughed every 2 minutes, on cue, with sincerity I might add.

Overall, after letting the film marinate in my mind, I consider this something truly unique. The commentary here is beyond clever---this film reminds me of 'Waiting' in many ways---except its commenting on the Catholic-culture, and modern Summer-Camp culture instead of the Restaurant Business as Waiting did so skillfully. Also, while watching, it put into mind 'Napoleon Dynamite'. Almost a hybridization of 'Waiting' and 'Napoleon Dynamite', I'd say, yeah.

Natalia Dyer plays the innocent Catholic School-girl with ease. She embraces the tone, yet plays the role well; she's in on it, but has developed acting-wise since 'Stranger Things' so she can handle the script. She's terrific in Stranger Things. But, here, she's even more magnificent, as she's headlining the project. There's nothing "perverted" about the movie---it really does subject you to situations that should make any normal human being feel awkward, yet laugh, too.

It's less of a film, and more of a conversation on sin, church-corruption, and the many conflicting situations that young kids, boys and girls, face each day; in America, and all across the planet.

That conversation really isn't, and hasn't been had the way it should be, generally speaking. Sex-Ed is terrible in my country. The US has done a pitiful job educating the youths about Sex; while the church has been in scandal after scandal for pedophilia accusations, among other nefarious sins, and they try to cover it up every time. That's an extreme cultural paradox---quite twisted to know and think about.

"Priests" openly want to be called 'Father'; the bible says in Matthew 23:9: "Call no man your father except that which is in Heaven."

Supposedly, "10 Hail-Mary's" get you into Heaven; yet, the bible openly says all those who profess Jesus Christ as their Lord and Savior, will be Saved and have eternal life in the Kingdom of God.

Depravity is inherent in the human spirit, according to theologians and the Bible itself. We live in a "Sin-Cursed World"; a "Fallen" world.

The Devil is really the God of the Earth, while God is the Emperor of the Universe itself.

Satan is nowhere near as powerful as God---the devil influences people, but overall, according to scripture, its the Sin of people that causes evil in the world. Our Sin caused the curse of Death: "For the Wages of Sin is Death". The "Church" is a multi-denominational entity, yes. But, really, all of Christianity itself is an umbrella: The Church is not a building, it's the whole congregation of all the souls who truly believe in Jesus Christ.

Catholicism is more of a traditional faith where sufficient power is placed into the church itself; also much emphasis is placed on The Virgin Mary as a divine-figure--almost a type-of god. This differs from American Protestantism which invests faith solely in Christ and The King James Bible; while respecting the Virgin-Birth, but not deifying Mary.

I'm not trying to get religious. I'm simply trying to get to the core of this conversation myself, in my own way. SOME of the church is corrupt, as seen daily. Human Beings are corrupt...we are cursed by Sin.

To talk about it so seriously really sucks the fun out of things. So, films like 'Yes, God, Yes' take this ultra-somber conversation that's absolutely awkward, reworks it comedically, and boom, it makes for a wonderfully hilarious film.

I applaud Natalia Dyer for her work in this motion-picture.

I also must give mad-props to Karen Maine---what a great writer. What an eye. The language of the script, the pacing, tone, and Maine's direction; it all sticks, near-perfectly.

I give this 5/5 stars. It's damn good, very funny, and has good rewatch value.