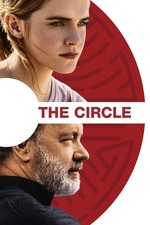 'The Circle' brings home a true, heavy message that I think all should subject themselves to---to form a new opinion on this new, revolutionary period of 'Social-Media'.

The film is essentially predicting the market, yet with an abundance of Satire to go with it.

I "quit" Social-Media a couple of months ago, I have pages up as a creator of content but I don't log onto them every 30 minutes like I used to do for several years---setting my mind to other tasks totally, without any Social-Media interruptions, has really opened my eyes. It's given me greater focus, clarity, as well as putting me in better touch with my emotions which grants me more self-control.

Social-Media, I'd say, is just about as addictive as Nicotine---more addictive. Yes, more habit-forming than cigarettes I dare say. I truly can say this because I quit Nicotine/Tobacco products on January 21st, 2021, thank God. Quitting Social-Media has been harder to stop, in all honesty.

I love this film. The actors are great, the technical aspects are well-done, everything shines here; it's not a masterpiece.

However, from a satirical-standpoint, it kinda is.

Overall, the commentary taking place in this motion-picture is quite amazing; it applies to all of us, all of us who have, or are using Social-Media more than we should---and/or for those using it for purposes they shouldn't be.

Some of the potential consequences aren't even technically "criminal" per-se.

Are you okay with "such-and-such" Super-Center-Mega-Corporation knowing every detail about you? Would it bother you to know that a team of Business-Psychologists were hired to look at your profile among, let's say, 300 others like you, to determine your specific "demographic's" likes and dislikes, interests and disinterests, loves and fears??? How would that make you feel, really?

When these companies are digging up info on their millions of potential customers, there's a lot of blue-collar psychology involved at the end-of-the-day. With respect, I can see why they do it. They make money, they want to gain more money, customers, and influence---why not just mine data, metadata, and throw surveys at as many people as you can to figure out their truest desires so you can fulfill them within whatever market you're in. I get it.

But, just because I get it, doesn't mean I condone it. Nor, do I want anything to do with a society that disregards the basic human-right of privacy. Some companies are absolutely predatory.

Some people are, too. Social-Media has amplified the Stalking age ten-fold.

Society, Economics, Civilization itself have all flourished mainly because of one vital thing: PRIVACY.

Privacy is the foundation of Freedom; without it, freedom could very well die a painful and swift death. This Social-Media mess is "To Be Determined"---I just don't forsee it expanding liberty, but rather oppressing it, in its true-form.

'The Circle' shows how this may be the case---some films go very comedic with the Social-Media themes, but not this one---we see the full threat of Technology, The Internet, and all these mingling apps where eternal digital-footprints are left.

With our digital-footprints, we can easily have our identities scammed. We could have our photographs taken from us and used by fraudulent companies, or even individuals, for profit without our knowledge or consent. A Stalker could add up the information on the web, and decide to go for a closer look in person; scary, but true.

Think about things this way....

Back in 1959, a highly-ranked C.I.A Field Agent would have essentially 99% less of the technological capacity at their fingertips at that time than a 13 year-old Middle Schooler does now in this 21st century.

Bio-Metric tech: Watches, Headphones, Shoes, Cars, Fridges---(linked to people's voices, finger-prints, and Social-Media Accounts)---collecting statistics, which you can share publicly. That's something that someone from the 1920's would call 'The Devil' if they saw the technology operating back in those times; especially with such deregulation, monopolization, and lack of privacy and natural-rights.

Social-Media WILL BE weaponized, perhaps it already has been. Digital Mob-Rule has taken effect!!!

The 'Big-Brother' sites are much like High-School-Kangaroo Courts; take a look at the facts---how many jobs, names, and associates of those names have been tarnished, humiliated, and "vaporized" in our society. Some names are too big to fail, yet most are not---CAREERS ARE BEING DESTROYED DAILY. Not just in Hollywood, but all over the private and public sectors.

Usually this career-assassination stems from past mistakes, or immature, inappropriate, or even, in the rarest of cases, unintentional actions. All those people being called out and basically having their livelihoods decimated may have said something offensive, or against the status quo of today's time---could've even been drunk. They probably said it back in 2003 in a "You've Got Mail" chat or something, and it doesn't matter; these new folks want blood now, no holds barred. NO FORGIVENESS.

Not only has the Social-Media-Monopoly made privacy a past-time, it also made Forgiveness one as well. Think about that.

'The Circle' is, in my eyes, a more "Orwellian" film than '1984' itself, considering the ever-so realistic nature of the story, and the contents therein. 1984 was a big "what if?" film. Eric Blair/George Orwell finished the novel in 1948.

The film came out in 1984, rightly for the title's sake---yet it was so grandiose, so grimy in vision, so specific that it didn't mirror anything of the 1984 that humanity experienced in reality.

'The Circle' takes many real-life elements that we have experienced over and over on the web, or just using our smart-phones, and it applies them with storytelling; it just makes you think.

The actors play off the satire so damn well; this works to the picture's advantage. I immediately compared most of the dialogue, exchanges, and subversive messages to my everyday life; the theme of 'The Circle' is overwhelmingly obvious: SOCIAL-MEDIA IS UNIVERSAL.

You could even say Absolute....

That's the best way to describe the theme. Social-Media can simply be a tool. What if it becomes a Weapon?

I've watched 'The Circle' once, and its for sure getting a few more rewatches from me. It earned 'Cult-classic' status with me instantly. Weirdly, I just found it randomly scrolling through 'Amazon Prime Video'---had nothing in mind that I specifically wanted to see, and just went with this. What a blessing that this film found me.

Tom Hanks' inclusion here opposite Emma Watson is an automatic win for this film.

Ms. Watson gives the movie its soul---she's such a warm presence, innocent too. She's the protagonist, yet she plays more as the audience; as she learns, we learn of this world, the tech, etc.

Technology isn't evil. Much like, let's say, guns, technology doesn't have morality. Whomever uses a gun wrongfully, they are the evildoer.---Whomever uses technology and/or Social-Media for vile purposes, they are what keep that shadowy stigma hovering over the whole enterprise of invasive-tech.

If infinite applications are going to be out there, with "Data-Mining" at their core, and the masses consenting to that, then there need to be those of us who always say "what if?" and bring those questions to light. The stigma attached to 'Social-Media' doesn't have to be shadowy. It can be legitimate---maybe, like a pack of cigarettes, our Social-Media platforms need to come with a warning....

It'll be easy for Social-Media to be weaponized. Look at any other technology that's been established for more than 3 decades and how radical the uses for those types of tech can be today.

A baby-monitor, for instance, is not meant to spy on adults; its simply a device meant to keep infants safe from harm while adults are in another part of the home. However, even a baby-monitor can be turned into the most sophisticated of spying-contraptions, given you have someone evil enough to do that.

'The Circle' explores the potential lethality of all this newfound technological power, overreach, and monopolization---I won't name names, but the satire is pointing many fingers at the companies the world knows and loves. The companies that have allowed folks all over the planet to keep in touch with loved ones---especially since "you-know-what" hit last year.

Yet, whatever happened to the telegraph? The printing-press? To Hell with the intrusive smart-cellular phones----what happened to the actual home/office Telephone? Heck, you can't even get a VCR anymore---if you do, it's 750 bucks and people around you look at you like an Alien for getting it/having it.

The Mail? Letter-writing is almost an ancient practice to many young folks of this day and time. When they receive a letter, they don't quite understand the gravity of such a thing---someone pouring their mind, love, or thoughts out to you on paper, all to you, or sharing news of a heavy story to you, personally---that's such a precious and serious thing.

Those companies that have digitized love, happiness, etc., they've reduced the human-language and capacity for emotion down to a blank-tab: "What's on Your Mind?"

Nowadays though, when some folks say exactly what's on their mind on these sites, well, things don't turn out so well for them. The era of political-correctness and "Cancel-Culture" have dethroned Egalitarianism, Freedom of Association, and basically our whole notion of Natural-Rights.

If 98 people disagree with me out 100, and 1 person out of that those folks agrees with me, then me and the other person with the opposing viewpoint to the "Mob-Group", in this day, COULD be publicly rebuked and shamed, out-casted, de-platformed, and possibly fired from our jobs as well as other consequences.

Now, is that right? Is it ethical?

We'll have to wait and see.

I just love how The Circle's satire delivers its message so objectively, and without remorse---its really up to you the viewer how these new technologies will be used; for the good or the bad.

The internet was meant for many things, but it was never meant to be trusted. Period. I'm almost preaching to myself here. Linking, syncing everything, using "auto-fill", all these little gimmicks---the real Cold-War-II is an 'INFORMATION-TECHNOLOGY WAR'.

Those "advanced Auto-warranty" services' folks who keep calling you all are probably a basic-A.I from India or some-such thing.

We'll never truly know where these applications will go, nor where they'll take us. Yet, if you look at what's occurred thus far, I'd say, the future-picture is quite unpleasant.

The real, Generalized A.I's, once they get a look at all that madness, won't be too pleased with us Homo-Sapiens....

'The Circle'. Watch it. Rewatch it. I hope it makes you ponder as I've done. And, if you're reading this: "Get Your Butt Off Social-Media, What Are You Thinking?!"

I give 'The Circle' 4-and-1/2 Stars. I highly recommend it for viewing, as well as rewatching.