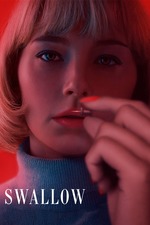 I was absolutely blown away by this film from beginning to end; it's beautiful---just getting straight to the point, cutting the BS.

Haley Bennett, she is a superstar here. A true leading lady, in a very gruesome concept; however, that high-concept is balanced by very human issues.

Her character deals with father-issues--yet, her worst issue: She spontaneously starts 'Swallowing' random objects around her.

It's actually terribly horrific; gave me some proper viewer-anxiety---a film that can make your skin-crawl was very hard to make in most all cases. I applaud Carlo Davis for his directing and script-writing on this project---so happy I got to see it, truly.

As a person who loves the new-generation of film just as much as the past ones, 'Swallow' gives the next-gen film-era some leverage. The genius here was that Carlo Davis took such a small, low-minded idea and made it into a high-concept "thriller" while keeping it extremely contained to the protagonist presented to us viewers.

I enjoyed the fact that it gives some insight into the female perspective with regard to mental-illness---seeing up close a female character, with such a raw performance from Bennett, become so obsessed; it is quite intriguing, I must say.

There's some political-undertone as well; I see a Post 9-11, Post War-on-Terror look at society, marriage, suburbia, the modern-family---especially with the rise of technology, Social-Media, and Globalization.

A big underlying focus revolves around collective discrediting---can someone have such heavy issues and "baggage" that everything they say just doesn't count in the eyes of their family, friends, community, etc??? Now, what about a mentally-ill woman? How does she fend for herself if she's surrounded by people who think they know better for her?

What rights should you really have if you can't control yourself, or your actions?

It's weird that a film called 'Swallow' can bring about such discussion from someone such as myself, but that's its brilliance, indeed.

Bennett's character Hunter, a newly-wed, moves into her new home with her hubby; the film gives off a modern Brady-Bunch vibe of sorts. The starting frame immersed me---the photography, costumes, production design, all of it are swell. Everything fits as it should.

I was most impressed by the originality of the script. Haley Bennett was meant for this role---should've got an Oscar-consideration, if she didn't.

I'm praising this film so heavily because it deserves it, bottom-line. More films deserve more praise---in this Social Media age, where the arts are getting left-behind, film has become less and less discussed in social-circles it seems. Social-Media, the Internet, they gave us more negative-critics and less original-artists. The bigger problem, with film getting over 100 years old as a medium, is that people are harder to fool these days. They've "seen it all", if you will.

The technology has become so accessible, so easy to use, and the content so easy for the public to publish that many of the consumers look down upon the arts as things which will always be, or always have been....

There's terrific quality everywhere from TV to film, to Anime, onward--that many of the masses, especially some of the newer kids, take all the entertainment-tech for granted. When I was a kid, the first Play-station was as good of entertainment-tech as I had seen. The most "advanced" film I'd seen at that time was the 'Lost in Space' remake around 1998.

When Hollywood gave us 'The Matrix' I was shocked. That was my 'Star-Wars'; I grew up with Keanu Reeves as 'The One'.

I APPRECIATED film---still do. Now, more than ever with all the variant madness occurring. I still don't feel comfortable going to a theater.

Film-going, theater-viewing, DVD-collecting, they're luxuries that many consider a given of life; when a little over 100 years ago, it was totally alien and unheard of, especially on the scale we see it now. 100 years ago, most folks didn't even have a radio, much less a Television--and you cannot forget about the TVs then not having color.

'Swallow' made me once again get in touch with my love for film, true film. It has such heart, and its own unique style all the way. The story is pure Cinema, honest-to-God. It struck me in so many ways. I just happened to find it. Thankfully, I purchased it instead of renting.

No, 'Swallow' didn't break the box-office, or start up a 7 film solo-franchise that will lead to a 7 member super-team up with 4 sequels--that'll each make 1 billion dollars...

Still, I urge you to view it. I highly recommend it. SEE THIS MOVIE.