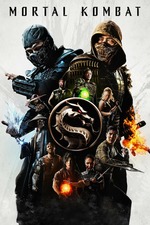 'Mortal Kombat' means more to me than some could understand. It's been apart of my life since I was 5 years old--truth be told, I didn't own the game til it appeared on the original 'XBOX'; I played it heavily before then at friends' houses.

They had Sega game-systems---I didn't have one til the 'Dreamcast'---we played for hours, many days at a time. We learned fatalities. Really I mean "they". At 5, 6, and 7, I wasn't that prolific at MK. Still, seeing it, trying it, learning it was an awesome experience.

Sub-Zero and Scorpion ALWAYS have been my favorites; also Jax Briggs and Cyrax---I really enjoy the entire MK Mythology. It's quite amazing, almost like it was discovered and not invented. It's globally popular, more than marketable. The series has spawned around a dozen games over 3 decades or so.

The movies that came out in the 90s, wow; I watched those with such focus as a youngster. I saw the first when I was about 6. Saw the second one in theaters when it came out with my Uncle and my Mother. I vividly remember the experience, seeing Shao Kahn, Jax, and Cyrax in live-action for the first-time--the "Animality" story-line, it all intrigued me greatly.

I'm still in love with the older Mortal-Kombat films. They're well-made films considering the fact that video-game properties in that era were not treated, nor taken seriously. Both of those 90s versions of MK take themselves very seriously.

They have their very own style, while also being a cohesive, coherent duology.

I'm also a fan of the web-series that released several years ago starring Michael Jai White among others. It was great, loved it. Now, 2021: we just got the inevitable Mortal Kombat big-budget reboot.

I'm such a fan of Mortal Kombat, and it's awesome that it finally has a big-budget, modern film treatment. Still, though, and let me get this out of the way quickly, it's not as good as either of the 90s films; in my strict opinion.

I viewed it on HBO-Max when it first released. It starts savagely. We're given some insight into the feud between the Chinese and the Japanese (Sub-Zero and Scorpion) respectively. The motion-picture hints at an extremely brutal rivalry here, and I bought it immediately.

Yet, subsequently, we go where the film shouldn't have: to a random character named "Cole". Not meaning to jab at the actor, but what a bland character, man. NOT APART OF THE GAME, might I add. That's a major problem, truly. I had no connection to Cole, nor was he believable at all.

I did like the actor Lewis Tan---he just wasn't given the proper development, or anything heavy to do in the script. He should've been an actual MK character, not a Studio-plug-in made by the execs in rewrites. His character brought nothing to the story.

Yes, Mortal-Kombat is just a video game. No, I wasn't expecting an Oscar-Worthy film. However, it's 2021, man; this film should be something new, fresh. Instead, it's a shiny film with a very limited script. It does have some brilliant moments, shots, and CGI.

Still, though, the editing is poor---their choreography isn't as great as the director Simon McQuoid made it out to be. I don't blame the director for MK's flaws, I blame the studio. The film smells of a "Studio-Film".

I love Sub-Zero/Bi-Han in the film played skillfully by Joe Taslim. Scorpion/Hanzo Hasashi played by Hiroyuki Sanada is the centerpiece of the film---the actor did superb with what he was given. I really appreciated that those characters weren't "white-washed". The presence of Asian-Actors in the picture gave it solidity; yet, the filmmakers didn't commit fully. The filmmakers could've taken that to so many different places...

That's the whole film....the writers didn't commit, the studio didn't, and if you look close, some of the actors didn't commit the way they should've. Yes, it's still a blockbuster. But, they had an opportunity to really make a new 'Raid:Redemption' type-deal. Instead, we got a meddled with, chopped up, really shiny MK Reboot....which, at the end of the day, I'm fine with; could've been a helluva lot worse.

I give the film 3/5 stars. I use the word film purposefully, because I respect the effort, the attempt---it's just they didn't land the trick as well as they should've. At first, I said to myself "Oh, it's just a video game adaption, it doesn't have to be great".

I don't agree with that mind-set any longer. ANY MOVIE can be great. EVERY MOVIE should be---or at least, if the skill isn't there, then the project should be treated as if it's the gonna be the last movie ever made. That's how I feel.

Cole is the worst part, in my view. I've seen the film twice, and I just don't understand that character's purpose, his costume, his skills, his family--"zzzz...."

But, when the fighting and fatalities transpire, then you can't help but to be into it. I do hope for a sequel or two; wouldn't mind a switch-up or two on some of the actors. Yet, Joe Taslim and Mr. Sanada need to stay as the foundation for the new series with their characters' rivalry.

The writers are gonna have to shake it up when a sequel is green-lit. I would also try out a different director; someone with a much different vision than this. I liked the film! Truly! But, I'm a futurist...I want to see a masterpiece MK motion-picture. Video-Game films have such potential if given the right time, team, and money.

Definitely gonna be watching this Mortal-Kombat picture for sometime. I may be a little harsh on it, but that's just because I see its true potential when I'm viewing it. Can't wait for the sequel(s). I suggest you watch the film, even if you're not a MK fan.