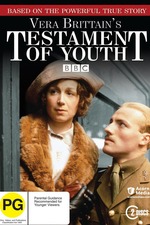 Vera Brittain's memior "Testament of Youth" had a profound effect on me and remains a book that I think about quite often. If you're not familiar, Brittain (and her cohort of women who were in their late teens and early 20's at the outbreak of World War I) witnessed the loss of a generation of men. Nearly every young man she knew -- from her brother to her fiance and all of their friends -- were killed during the war -- an end to a huge number of would-be contributions to the arts, science, politics, etc.

Brittain, who served as a nurse in various capacities during the had the additional challenge of feeling disconnected from the women who were just a few years younger -- as they talked about the typical teenage/ young adult things -- boys, get-togethers, while Vera was left with a heaviness of heart and disdain for what now seemed frivolous to those who had lost so much. She was a fascinating woman who became involved in politics and women's rights later in life.

This BBC five-part series does a good job showcasing the highlights of the book and does a great job illustrating the time period and the horrors of World War I. I feel like the book had more of an emotional punch for me -- but I tend to feel that way about books in general, so it really isn't the fault of the series.

Eternal Sunshine of the Spotless Mind