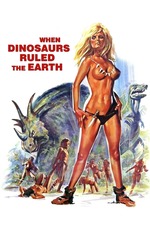 I thought I would take a break from Japanese giant monsters and go back in time to When Dinosaurs Ruled the Earth! This was the third in a series of four pre-historic Hammer films - One Million Years BC, Prehistoric Women, this one and Creatures the World Forgot. What they all seem to have in common besides the time period is really bad science and fine looking women in scanty bikini styled apparel. Yup, those were the days. Lots of prehistoric playmates to have fun with when you were not running for your life from a dinosaur. While watching, I kept imagining Neil Degrasse Tyson in misery seeing this and thinking all his teaching was going down the drain in 90 minutes. At the beginning of the film the moon doesn't yet exist. Tyson going noooo - the moon is 4.5 billion years old. Man has been here for about 6 million years give or take a million. Then a dinosaur shows up. Tyson - noooo - the dinosaurs died out about 65 million years ago. But I hope he appreciated the babes. I know I did bad science or not. You don't need science to appreciate some thing.

This was an era when blondes did not have fun. One tribe sacrifices three of them from time to time to the sun. Seems kind of a waste killing off your best looking women. But during the sacrificial rites Sanna escapes by jumping into the sea. She is played by Victoria Vetri whose main skill seems to be keeping her well-endowed chest contained within her small top. Practically magic. Until much later in the film they come out of hiding and even the dinosaurs go holy shit. Let's just say they didn't need special effects. Sanna is picked up by a fishing raft and taken to their small community on the beach. Where they just happen to be capturing a dinosaur like an unruly bronco. Her appearance causes all sorts of domestic problems when Tara takes a liking to her. Then the first tribe comes looking for their sacrificial babe and Sanna and Tara have to go on the run. Because love is a beating heart. You know he is in love because he gives her his necklace of dinosaur teeth. It doesn't get much more serious than that.

Now the ending is a little confusing - in fact the film was because they speak in some tongue that they made up and there are no subs. Mainly the words are "neekro" which generally means kill, hurt, smack the crap out of him and "akita" which is used for everything else. Come on guys. You have to have a word for bada-bing-bada-bing. I just hope the other Hammer Pre-historic films use the same language or I will be lost. But as best as I could figure out when the moon suddenly is formed - like in two days - they think the reason is Sanna wasn't sacrificed. Then they have something like Noah's flood and end up on a mountain - Ararat? Get busy. The human race depends on you.

There are all types of dinosaurs in the film that once upon a time I could have named - but not any more. They are all big and have sharp teeth. Rather than having a man in a suit ala Godzilla they use stop motion and I think it was done quite well. More dinosaurs, less melodrama would have been my advice. The special effects were done by Jim Danforth who had worked with the great Harryhausen. Stupid fun.