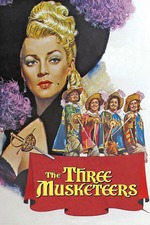 MGM pulls out all their guns for this version of the classic swashbuckling tale, The Three Musketeers. Glorious Technicolor, incredible production values, opulent sets, a big name cast and some splendid action scenes. Yet the film is almost bipolar. When it is good, it is really good and when it is bad it is oh so bad. And the cause for both falls on the same man. Gene Kelly as D'Artigan. When I saw Kelly and June Allyson were in this I thought it might be a musical. Silly me. Nope, it is a standard MGM adventure romance where everyone looks like they just spent a week at the spa being scrubbed.

Kelly certainly brings his dancing prowess into play. His physical moves, leaps, jumps here are remarkable. It is jaw-breaking at times at how wonderfully he moves and fights. The famous scene that I think all Musketeer films have when he has to duel Porthos (Gig Young), Aramis (Robert Coote) and Athos (Ven Heflin) and then the Guards show up and all four fight them? It is a tour de force of Kelly showing one astonishing move after another. I mean I was more impressed than when I have seen him in his musicals with his dexterity. And this was just after having recovered from a broken ankle (in which Easter Parade went to Fred Astaire). All the action scenes are well done - and the horse back riding too. Almost exhilarating and beautifully shot. I felt like I was 10 years old again.

But then there are the times when they are not fighting and the film plods along like a wounded animal. Again mainly due to Kelly. I don't know if it was his or the director's interpretation of the character - but it is painful to watch. Kelly who was 36 at the time makes D'Artigan into a buffoon at times. A young lad fresh from the provinces who just came to the city and is like a pimply adolescent who mugs, grins and swishes his butt. In one scene he looks through the trap door on the floor that spies into the apartment below. June Allyson enters from outside and D'Artigan starts moaning like a pervert and when she takes off her cowl I thought he was going to start masturbating in giddiness. He was literally rolling around on the floor.

A minute later he is with her downstairs professing his love for her. Ewww. That is not romantic under any definition of the word, Not even in Bollywood. It is just creepy and silly and threw the film off for me. I felt embarrassed for Kelly. Later he falls for Lady De Winter and again gets all stupid declaring his love like a farm boy to his cow. Not that Lana Turner is a cow, She is a Technicolor Queen. They must put lights inside her gowns because she just glows like a Broadway show. Spectacular. I like June Allyson but when she is next to Turner she kind of disappears.

The basic plot I think - D'Artigan comes to be a Musketeer - meets his three friends - falls for a damsel - and saves the Queen (Angela Lansbury) from having her affair with the Prime Minister of England revealed. Behind the King (Frank Morgan) is the nefarious Richelieu played in swinish fashion by the the great Vincent Price. Some good sword fighting, a sinister plot, Lana Turner looking like a billion bucks but it allows itself to get bogged down at times with Kelly whispering juvenile words of love. Maybe a couple of songs would not have hurt. They had initially planned to have Douglas Fairbanks Jr play D'Artigan. Hard to say but he might have been a better choice. It was a role of course that a young sober Errol Flynn would have taken by the neck and squeezed everything out of it. Surprising actually that he never did.