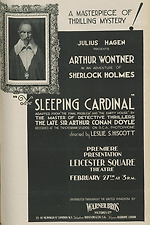 This was Arthur Wontner's first appearance as Sherlock Holmes. Four were to follow though the next one Sherlock Holmes and the Missing Rembrandt is a lost film. Wontner is fine as Holmes - definitely has the looks from the book. He is a kinder gentler Holmes compared to Rathbone who often mocked the police and cruelly teased Watson. Not a lot of edge to him but an awful lot of talk. This is a very talkie Holmes. More like a play than a film as it only has a few sets, all interior. Low budget.

Moriarty shows up again in Holmes apartment to warn him. Nice of him. Considering how rarely Moriarty was in the books - twice - it is rather amazing how he captured the imagination of the public. His character has been in so many films, TV shows and even has his own books. The criminal kingpin of England with thousands of agents everywhere. In the film everyone thinks Holmes is nuts, obsessed with his imaginary villain, a man of many disguises. You can see this idea of obsession with Moriarty play out in the 1976 film The Seven Percent Solution.

A woman comes to Holmes worried that her brother is cheating in cards because he wins all the time. Holmes being the genius he is immediately sees the connection between that fact and a break in at a bank in which no money is taken. Watson as usual is of little help and always wrong. At one point he tells Lestrade it must be suicide. But there is no gun. Well perhaps after he shot himself in the head he got up, threw the gun out the window and sat down again. Even Lestrade doesn't go for that one. Watson is again played by Ian Fleming who does the Watson duties in three of the five films and Mrs. Hudson is played by Minnie Rayner who was in four of these as the landlady. Way too talkie but it is 1931 and films still tended to be that way - but it is a reasonably decent smart straight up film. Up on YouTube as I expect all of these are.