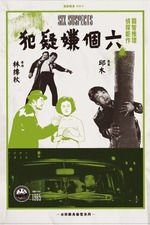 I have to admit to knowing next to nothing about Taiwanese cinema of the 1960's. Not that I don't want to but much of it is shrouded in mystery because so many of the films are lost and of those that remain not many have been released with English sub-titles. There has been some progress towards restoring some of these films but as far as I know there are only a handful or two that have received this treatment and they are shown mainly at special showings or film festivals as a sideline.

In the 1960s Taiwan was under the strict rule of the Kuomintang who had fled the Mainland in 1949 to settle and eventually take over Taiwan. There was a great degree of censorship and anti Communist propaganda in their films. But the vast majority of the films being produced were still in the Taiwanese Hokkien language but that was undergoing change as well and the last film to be made entirely in Taiwanese was in 1981. This film I assume was in Taiwanese since it certainly wasn't Mandarin and I see no fingerprints of the government on it. There certainly seems to be no propaganda in it and it surprisingly portrays a fairly immoral society by focusing on one steel corporation (representative perhaps of the new Taiwan driving towards modernization?) in which everyone is up to something - either affairs or embezzlement or corruption. Nearly everyone seems to be bedding someone they should not be. And when not doing that they are drinking in small bars, brothels and gambling houses all the time. It is by no means a flattering picture of Taiwanese society.

And then there is of course blackmail and murder. Tenn Kong-hui (Wai Wang - who went on to play a lot of villains in Shaw Brothers films) is a bit of a sleaze. A shady character who can smell out scandal in a glimpse. He begins with his ex-girlfriend Tai-giok (Hsia Chin-hsin) who is having an affair with the fiancé of the chairman's daughter - and she is having an affair with the Chairman. The fiancé also has some more crumpet on the side and is taking under the table money from construction firms to make decisions in their favor. The brother of the chairman (Lai Te-nan) is also messing around with a bar girl at the White Peony Nightclub - and his wife (Chang Ching-ching - One-Armed Swordswoman) may be doing the same with her cousin. It is basically Peyton Place. Tenn decides to blackmail them all at one go - and when he turns up dead no one is surprised. The cops begin to nail down everyone's alibi and eliminate them from the six suspects one by one.

Not the most thrilling of films unfortunately. It plods along from one suspect to the next. The first half is the creep getting the goods on everyone and blackmailing them and the second half is the investigation. One thing I learned is that when conducting illicit affairs Taiwanese don't close the blinds and they have very large keyholes to look through! What I appreciated most was just the opportunity to see a film from this period, the depiction of Taiwanese society and the outdoor scenes - rickshaws!