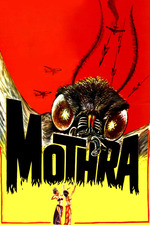 After seeing Mothra vs Godzilla and Ghidorah, I circled back to see the first Mothra (or as us Kool Kids say, Mosura) to see where it all began. The idea of a giant moth I have to admit doesn't strike terror into my heart - just put a giant light bulb on top of Tokyo Tower and let it fly around that for hours. But in fact Mothra is a good guy (or girl actually) who intends no harm to anyone unless being attacked. She is basically a cow in a china shop. Underneath all the Kaiju aspects in the film, a few themes run through it almost under the radar but likely important to director Ishirô Honda.

Most obvious in the influence of King Kong (1933) on this. King Kong for its great drama and special effects was at its core a condemnation of capitalism, greed and the destruction that brings on. Here a Lost World is explored and exploited as men take creatures back to their country to exhibit for money just as in King Kong. At least here unlike in King Kong the man meets his just end, but first his actions cause enormous devastation. Another interesting aspect is that the villain is not Japanese but from the fictional country of Rolisican which is clearly a stand-in for America (the R was for Russia but it's all USA) and America does not come off very well as it uses its power to bully Japan a few times and uses a radioactive nuclear ray to attack a cocooned Mothra. In Japan. Why the filmmakers could not just call them Americans I don't know but it is a clear shot at American influence in Japan (perhaps concerns about the American market - this gave them plausible deniability - no, they were Russians). Not that the human race in general comes off very well with only a few exceptions. The Japanese military in particular seem to be a non-thinking vehicle of war by attacking Mothra even though they know why Mothra has come. Oddly, Christianity pops up for a mysterious cameo that I never quite understood. Is Mothra a Christian? Does that explain her generally pacifist attitude. The forgiveness of the twin fairies towards men? I am sure there are books written on this. And as in many of these Kaiju Eiga films, nuclear radiation comes into play. So it is chockful of ideas that are shoehorned into the story.

Much of the fun comes from the miniature models of cities and buildings getting destroyed, the two fairies (Yumi and Emi Ito) have a big role in it (I wonder if they ever put out a pop album). the natives dance and Mothra grows up. It seems more for children than adults - perhaps that is true of most of these - but cool enough with the special effects that everyone can enjoy them on some level. And as mentioned above themes were woven in that children may not have gotten but certainly adults did.

Inspired perhaps by the real life account of the Lucky Dragon in which a ship strayed off course near Bikini Island which was used for nuclear tests and people on the ship received a large does of radiation. In this case, a ship goes down and some of the sailors make it to Infant Island, also used for nuclear tests. But when they are examined they show no radiation reading which makes no sense. So an expedition is formed headed by Nelson from Rolisican. On the island they come across our two lovable fairies who are not very good at hiding. Nelson wants to capture them but is dissuaded by the Japanese. But he returns, captures them and in Tokyo puts them on display where they sing to the audience. And that seems to be perfectly legal. But they are also singing for Mothra who is yet to be hatched. She hatches though and as a larva heads for Tokyo to take back the fairies. Mothra doesn't show up till well into the film and doesn't morph into a giant moth until near the end. You have to keep the audience waiting and build up the story first. The film is overall - other then Tokyo, a ship and a dam being destroyed fairly gentle - it is really a plea for peace through the voices of the twin fairies - but will man listen to them? Not a chance.

The Thief of Bagdad