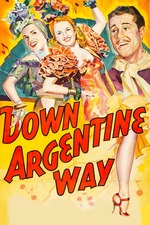 I can almost imagine the head of the studio - in this case Jack Warner or Zanuck - telling the producer "Don't talk to me about plot. We don't need a stinking plot. Just get them to Argentina and have a song every five minutes. And get the woman with the fruit on her head to sing. That is all it needs". And he would have been right. This was a big hit and it made Betty Grable a star. Grable had been kicking around Hollywood since the early 1930's when she was sixteen - getting a lot of uncredited roles, roles in second tier musicals and basically going nowhere. Fox already had a blonde musical star with Alice Faye who was very popular. And was slotted to get the main role in this film. Then she got sick and rather than postpone the film the studio looked around for someone that was similar. Betty Grable. She could dance. She could sing. She had great legs. And she was blonde. She was by no means a great singer or dancer but she was good enough they thought.

She is like vanilla custard - soft and creamy. So white you don't need a flashlight in the dark with her. She offsets it though with deep red lipstick that is a neon sign flashing "kiss me" and blue eyes that say "not so fast". The All American Girl. Nothing even mildly exotic about her. She went on to enormous popularity. Her pin-up during the war of her in the white bathing suit looking over her shoulder was in nearly every cockpit in the air force. They actually used it as a bomb guide. She was the girl they all wanted to come home to. She was in the Top Ten Most Popular Actors for ten years running. More than any other actor. Ever. Some actresses really blossomed with Technicolor - Maureen O'Hara and her red hair, Ava Gardner and her dark sultry aura, even some B actresses such as Maria Montez and for sure Betty Grable. The eye-popping colors saturated them with glamor and magic. In black and white Grable never would have been a star.

Perhaps Carmen Miranda as well. Without Technicolor who would remember her. The film opens with Miranda performing a song - no fruit basket on her head but with enough colored beads and jewelry on her to sink a small boat. Singing a Latin flavored tune which were so popular at the time - Ay yii, ay yii, the South American way. Miranda can take any film and shake it awake. It begins in America - Grable plays the daughter of a wealthy man and she is into buying horses. And wearing gorgeous gowns. And going to the best nightclubs. But she is still the girl next door. If you lived in the right neighborhood. She meets Don Ameche - playing a wealthy Argentinian horse breeder - and having to do a Spanish accent throughout the film. He should have kept it for all his films. Ameche is quite the romantic man in this - he just needed the right accent. They love, they fight, he goes back to Argentina, she follows him just to slap him and then love him some more. There are horses in there too. And the character actress Charlotte Greenwood who always seemed to get the same role as the wealthy flighty flirting high kicking middle aged woman, Henry Stephenson also faking a Spanish accent as Ameche's father and Miranda as herself singing three songs.

Everything is posh here - swank nightclubs, high fashions and of course Argentina looks wonderful - except it was all shot in Hollywood other than a few establishing shots. The music is fine - of the period of course. Grable sings a few songs and dances and others like the Nicholas Brothers do specialty numbers. This is a pretty typical Fox musical - frothy, light on substance, some fine music, Grable is creamy, Ameche is amiable and Miranda is always worth a stop by.

The Thief of Bagdad