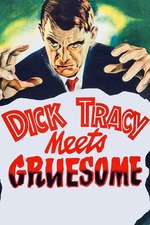 This fourth and final film in the Dick Tracy series from RKO was the one I was most looking forward to. Why? Because Boris Karloff is Gruesome. The Great Karloff. I admit though to being a little disappointed by Gruesome. With a name like that I fully expected a large amount of disfigurement - leprosy or acid in the face - maybe a lead plate sticking out from his forehead. Instead, Gruesome looks just like . . . Boris Karloff. In fact, one of the characters says he does. Gruesome goes up to a door. A peephole is opened and a man with thick binocular glasses looks out and asks his name. Gruesome. Isn't he says the man at the door. If I had been Karloff I would have been just a little insulted. With or without makeup Karloff is great - never overplays his hand - just quietly menacing throughout. And kills with no regrets.

The film begins at another down and dirty bar - probably the same as the last film and the film before that - just with a name change and an ownership change. This one is The Hangman's Knot. With a few nooses hanging down as decorations. A woman's touch no doubt. Gruesome is in town. Fresh out of the penitentiary - for good behavior he says with a sly grin. He is looking for Melody who tinkles the ivory in the bar - what's up - anything for me - yes a big job. Off they go to the before mentioned door that is opened by Xray (in a return appearance by Skelton Knaggs ). A bank job. They get hold of a gas that paralyzes everyone in place for a few minutes - just enough time to fly off with $100,000 in dough. But Tess Trueheart (played by a third actress, Anne Gwynne) was in the phone booth and wasn't gassed and calls Tracy. The game is on. Tracy is again Ralph Byrd. The inventor of the gas is A. Tomic played by the morbid looking Milton Parsons for his third appearance as different characters in these films. A well done film for its low budget - uses all the same locations of course but the film makes good use of them. There is some decent comedy thrown in as well at the beginning and end - but the middle is all dark and deadly. Btw - the ambulance attendant who gets conked in the end is Lex Barker.