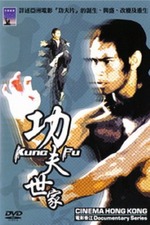 This takes up where “Swordfighting” left off. By the beginning of the 1970’s wuxia films were somewhat played out and hand to hand combat or kung fu took over the screen. The film digresses backwards in film history to show that the roots of kung fu began primarily with the Wong Fei-hung films starring Kwan Tak-hing and they display some great clips of his films – still very difficult to get with English subs. According to Sek Kin who often played Wong Fei-hung’s main nemesis in these films, it was basically the actors figuring out their own moves with most of them having little experience in martial arts but instead in Chinese opera.

In the 1960’s they began using action choreographers who had martial arts backgrounds such as Lau Kar-leung. Initially the films were often intricately choreographed with little contact, but this all changed with the “new realism” that Bruce Lee brought into his films – the fights were brief and violent in the manner of kung fu in the real world. For the most part, the documentary focuses on Gordon Liu, Bruce, Jackie Chan and Fu Sheng with brief clips of a number of their films. The final phase of kung fu that they cover is the advent of the kung fu comedy best exemplified by “Spiritual Boxer” and “Dirty Ho”.

Being interviewed: Jackie Chan, Jet Li, Sammo Hung, Sek Kin, Chor Yuen, Gordon Liu and Kara (I am not sure when the interview was done but she sure looks great at the time and is very personable). Easily the weakest of the three segments - Wuxia, Beauties and Kung Fu - it just doesn't have any depth. And the focus is all over the place. This felt a bit shortchanged overall with its short running time and though it covers a lot very briefly it could easily have gone into much more depth about the background of the actors as well as covering a lot more films.

The Woman in White