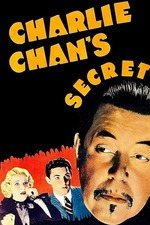 Strange how often medium's featured in so many of the old B films of the the 1930's and 40's . They must have been a bigger deal back then. Of course now you don't have to have a physical séance but can just call up 1-800-Sucker to get your fortune told or hear from the dead. In the times of covid that is relief. The interesting thing about the medium here besides that she is very attractive is that she is never proved to be a fake even though her partner is. She believes she communicates with the dead and Charlie seems to be a believer in that ability as well.

Alan Colby disappeared years ago and during his absence his father died and he came into a lot of money - but since he was presumed dead the sister of Colby's father has taken over the fortune and is generously taking care of her parasite family including the medium. When Colby sends a wire that he is still alive and coming home, the old lady calls her friend Charlie Chan in Hawaii to come to California and check that Alan isn't an imposter. The actor who plays Colby was probably hoping for a meatier role but he is killed as soon as he shows up by an unknown knife thrower. So Charlie is saddled with murder as usual and a few attempts at more. With lots of suspects with motives. Chan rather cleverly figures everything out and sets two traps for the killer.

Not bad though it feels a little unambitious with a plot that any movie detective of the time could have handled. Even Number One (Keye Luke) isn't around to add fun to a fairly somber outing. In his place they give us Baxter the butler played by the cherubic always bumbling Herbert Mundin, an Englishman who looks just like his name would indicate. You may recall him from being one of Robin's men in The Adventures of Robin Hood or the nervous nelly in Tarzan Escapes. Always enjoy seeing him and hadn't realized till I looked him up that he died in 1939 in a car crash at the age of 40.

What needs to be remembered is that though we look at the Chan films now as quaint little nostalgia trips filled with aphorisms and stereotypes - at the time Charlie Chan - and because of him Warner Oland - were enormously popular. They were produced by the Fox B Unit headed by Sol Wurtzel but they were a big deal and very profitable. And in demand. In 1936 they produced four Chan films and three in 1937 before Oland was to die in 1938 (and quickly be replaced). At the same time Wurtzel was producing the Mr. Moto films. Apparently, Yellow Face or Orientalism was a popular trend at the time.