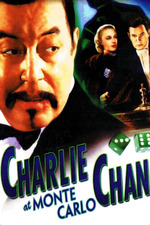 At the end of the film Charlie Chan and Number 1 son Lee get into a taxi and comically drive away after solving one more murder case. It was to be our last sight of these two actors together in those roles. Warner Oland was to die before his next Charlie Chan film was finished and Keye Luke had no desire to continue playing his character after Oland died - there is only one Charlie Chan for me, he said of his friend who he called Pops. Oland had played Chan in 16 films - four of them now lost. By the end those were the only films he was making. Not only did the audience identify him as Chan, but so did he. He loved the character to such a degree that he visited Shanghai with great fanfare and talked of this being his homeland. He even began talking in what were termed Chanograms - those pithy aphorisms that either delight modern day audiences or outrage them.

These days Oland is often treated with sneers and ridicule for playing the role of an Asian man in so many films and his portrayal of a humble, quiet traditional Chinese man in America. I think it is an unfair accusation - now you can certainly criticize the Hollywood practice of Yellow Face but at the time it was so common that no one thought twice about it (except I expect Asians!). And Oland always gave Chan a sense of dignity and he is always the smartest guy in the room making fools of all the white people around him - but doing so simply with facts and good manners. And with only a few exceptions he is treated with complete respect - to those who don't, he pokes fun at them that makes his point. The relationship between him and his large family and in particular with Lee is one of the most sympathetic and loving in film.

Oland was born in Sweden in 1880 and came to America when he was 13. He made his stage debut in the Sarah Bernhardt Company and began producing his own plays in the Hudson Theater. They were not successes and he tried his luck in film with Jewels of Madonna in 1909 with Theda Bara. He continued to work often in the silent era and with his Slavic looks he played all sorts of ethnic types - Russian, Turks, Indians, Hispanics and Asians many times. He was able to portray Asians with very little make-up - just a slight pulling back of his eyes. Pictures of him as him vs as an Asian were not so different. Unless it was Fu Manchu of course! He played Fu Manchu a few times. His first Chan film was in 1931.

By 1936 he was deep into drink. He got married to a woman ten years older than him and though that helped for a while he slid back. He was making good money for the time - for his first Chan film he received a salary of $10,000 per film - then $20,000 and finally $30,000. It was a very popular series and he was much loved. But the drink was taking its toll. He would disappear, he would be found in a drunken stupor on the set, a nurse was hired to stop him from drinking but he slyly hid bottles of it, he had to actually be held up in certain scenes and retake after retake had to be done. After this film he began filming Charlie Chan at the Ringside in 1938 but he was really out of it - he had been found wandering Los Angeles at night not knowing who he was. He quit the film - was suspended - dried out and signed a new contract for three more films but before beginning the new film he sailed to Sweden to visit home where he passed away.

His last film is a good one though at 75 minutes it is longer than normal and it feels it at times. Charlie is in Monte Carlo at the casino when the police inspector played by Herbert Huber introduces himself (he had been the police captain in the previous film, Charlie Chan on Broadway) - and introduces him to the characters who will play a role in the ensuing murders. A million dollars in bonds are stolen and a few murders tag along with them. Chan and son had been going to Paris to see Lee's painting in an exhibition (Keye Luke was a fine painter in fact), but they stick around for the murder. Among the suspects is Virginia Field who every time I come across her I wonder why she didn't become a star - just a knockout. Chan gathers them all in one room and makes his denouement. And then goodbye Warner Oland but Chan was to be back with a new actor in the same year, Charlie Chan in Honolulu. The film that had begun as the next Chan film was turned into a Mr. Moto film Mr. Moto's Gamble which has Keye Luke in it as Lee Chan.