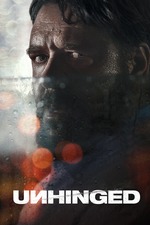 I'm very excited to return to a cinema to see a new film release. The joy of following a wee bit of a traditional marketing campaign followed by the screening which meets, beats, or betrays expectations. Back in January, I would never, ever, ever have guessed that UNHINGED--a Schumacher's "FALLING DOWN" meets Spielberg's "DUEL" hybrid starring a well-fed, angry Russel Crowe--would be a 2020 event film. But here we are. SPONGEBOB and Crowe have ushered back the slow return to cinema normalcy.

On the surface, UNHINGED is a workday-set, sunshine-lit slasher film with a psychotic villain using over-priced pickup trucks and minivans as his weapons of choice. And given the contraints of a relentless-stalker boilerplate, UNHINGED is alright simply as a hunter-prey thriller. Well-paced, high-stakes action scenes and car chase sequences. But even more effective are the menacing, cranky Crowe close-ups behind the steering wheel.

What's surprising is that UNHINGED is a very clever discussion on society's political frustration. I'm not familiar with the director, Derrick Borte, but he's got my attention. Time to check out his previous film AMERICAN DREAMER on Prime, I suppose, which seems to be another sour view of the American Dream not working out. What Borte manages so nicely in UNHINGED is to pit two socioeconomic demographics against one another. Crowe is the frustrated establishment--wealthy, middle-aged/pre-retirement, middle-right-leaning on the political spectrum. The unlucky focus of his scorn, Caren Pistorius, is an overwhelmed young single mom supporting her grown brother and his girlfriend, managing her mom's care (early onset dementia), struggling to keep clients for her business. She's battling a several of her financially-squeezed 'sandwich' generation's challenges. Despite that, it's not strictly a one-sided polar opposite to Crowe's character. But the script makes a case that Pistorius (and her generation) is an undisciplined mess who invites her own hardship.

So after a road-rage incident, Crowe--rather than posting Facebook memes about the good old days and how the next generation is lazy and disrespectful--decides to unleash all kinds of wrath. Driver-etiquette and horn-honking are just the script's plot device. Really, Crowe's not just losing his shit; he is an angry demographic blaming another group. He could just as well be the Canadian Conservative West lashing out at the poor, unemployed East. Or he could be the middle-class lashing out at the perceived crumbling of his status at the expense of lower-income neighborhood sprawl.

Borte's UNHINGED doesn't have any answers and its ultimate message is easy. But the weight of the "I blame you!" tenor hovers over the whole film as much as it simply embodies Crowe's character. It provides a uniquely hostile cinematic atmosphere. Honestly, this is Crowe's most interesting performance in a while. His riveting star-turn as an entitled, newly-disheveled, once-significant citizen makes one thing clear. The path forged by anger may not solve society's problems, but it makes for a decent return to the multiplex.
B+