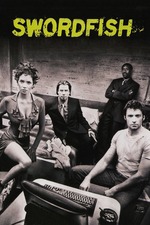 It looks like somebody was holding up orange tinted oakleys in front of the camera for every shot. It's easy to sit here in 2021 and laugh but you have to understand that people in 2001 thought that the "you wouldn't DOWNLOAD a CAR" warning on DVDs was basically the coolest thing possible and we were experiencing the end of history.

Some truly phenomenal scenes in this thing. Loved the scene where Hugh Jackman has to hack with a gun to his head while he gets a blowjob. Love the scene where two guys are chasing Jackman and so he jumps off a mountain and then they jump off the mountain and then it's like a three minute scene of everybody screaming and falling down the side of a mountain before landing harmlessly at the bottom. Love the scene where Jackman uses eleven monitors to hack into a cube and he explores the space in a way that makes it clear he was told to "just go for it!"

I think John Travolta is one of our most important actors. I can defend this but I don't think I should have to. I should be allowed to say stuff the same way a court jester does.