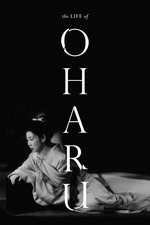 Through all the squeaky cinematic materials that were tackling an explicitly social themes that made such a huge alteration in countries' cultures throughout the world, where the cinema has been changed since like these films has been released back then, in which the big transformation has provide the audiences' visions a different look towards their countries, culture, and the whole environemnt that they live in. Cinema is a powerful element to delivering your messages and purposes that will needs a meaningfully solid way to makes your work reaching to the destination that you meant to, whilst this thing requires a rough time to make, the intensification is something fundamental that basically should be present to make the film more accurately, and to be more subtlety; where the substance will be strictly effective thing that essentially is the main item that the film standing on. Kenji Mizoguchi has made an essentially acclaimed cinematic masterworks that changed the path that cinema was going through, which has became
a massive inspirational source for films that released after, and a thorough reference to come back and learn some basic lessons about art and cinematic filmmaking, where the foreign cinema was most importantly than Hollywood cinema, both artistically and intellectually. The japanese cinema in particular, has became the most influential cinema to other ones, where it made such an uncompromised films that portrayed and captured a countless ideas that were too ahead of its time, which proved that art is something unlimited since cinema unleashed back then, where it made the audiences extremely influenced by its greatness, sharpness, and the timeless impact that it left, and which showcasing
a staggering critiques towards a lot of subjects matters; such as: mistreament, racism, capitalism, liberation, expolitation, utilization, humanism, consumerism, morality, politics, socialism, and another paramount themes that changed laws, cultures, countries' beliefs, people‘s life, and made
a big difference that made it an ancient things which made people became comfortable with, than before. Kenji Mizoguchi‘s cinema is a widely relentless view that constructed a gigantic world that has an endless of meaningful details about literal everything in the reality, where it depicted what is happening today perfectly, which makes it
a substantial proof that the old cinematic era is much better and stronger than the modern cinematic era in many ways, which can be supportively rightful to this controversial statement I guess.

Mizoguchi‘s style to demonstrates and illustrates his messages and purposes is thoughtfully approached and flawlessly characterized in terms of the immense intensity and the consistency he put on the characters' methods, and the colossal boldness in the dialogues between the characters; as well as the intensive concentration and the concentricity on the structure of the story, narrative, and the sharpness that existing in the individual scenes that makes the film highly consolidated in every sense. The Life of Oharu is a true gem, one of the greatest films ever made, that made a consistently explicit criticism towards morality, mistreatment, liberation, freedom, and the self-acceptence that some people do not understand it rationally. The film reveals
a poignantly sharp story about a girl who struggling and survival from the vicissitudes of life and the cruelity of her society, where the story has many of moments that were tumbling a realistic objections towards those people who know nothing about the real meaning of honor of human, the definition of the privacy of human, the concept of the expolitation as a human, the importance of the honor to the human, and the meaningfulness of our existence in this life. The development of the story and its characters is constructed thoroughly and wisely, where the essence becomes more valuable and powerful when the characters realize their definitive significance of their existence, which this thing becomes realistically heartbreaking. There are some heavy moments that were sprawling throughout the film that approached the construction in a way that was composed of astounding thematic material that was balanced sublimely in many ways, where the composition is stylistically remarked the approach that the characters were going through, and the bold signification that the film wanted to reach to, which transformed the characters' vision towards each other, and this portion was powerfully helpful to the construction of the structure of the characters that became one of the most delicate elements that made the film having an influential effectiveness throughout.

The Life of Oharu is an exquisitely marvelous cinematic ambitious material that put itself as an excellent masterpiece among the tremendously unforgettable accomplishments throughout cinema history craftily and worhtily. The depiction of the meaningfulness in this film is an enormous characterization that needs a prolonged essay to give it the complete fairness perfectly, where the conclusion is largely comprhensive, which has
a consolidated perspective structurally, which created a wisely major consequences to the story and the characters, as well as it built a respectfully significative and expressive extrnal result to the background to each character, where the context of the content becomes one of the most inclusive effects that a cinematic film has made to the audiences, which made its place among the greatest conclusions ever made in cinema history.
I was utterly influenced and totally affected by this greatness that was made in the 50s, yet so ahead of its time in many ways, artistically, thematically, and narratively.