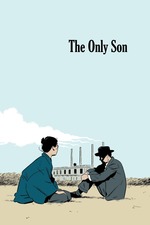 Ozu's first "talkie" is a bonafide masterpiece. A small, simple narrative that gradually and subtly grows more intricate and gripping the longer you bathe in its tragic layers. At its heart we see the disenchantment of the Meiji period (that period when Japan began to modernize and break from its feudal past) along with the growing discrepancy between Japanese capitalism and the real conditions in which people lived.

This disparity is absolutely critical to processing the hollowness of official promises as it relates to the characters of this story. Indeed, there's a certain irony to be felt while watching the young boy Ryosuke dream of higher education and material success when the economy itself couldn't financially support the growing number of graduates to hit 1930s Tokyo. His teacher even tells his mother that if the boy receives a proper education he'll be better prepared for his future. Did these characters not watch I GRADUATED, BUT (1929), or learn anything from Ozu's other prewar work related to the specious outcome of an academic degree? Bordwell states: "By the early 1930s, there was a huge oversupply of college graduates, and in 1936, 44 per cent of graduates could not get jobs." I don't care how many times Ozu made this film previously. I'm more amazed that he kept remaking it yet found new ways to articulate the humanity of the Depression in moving, thought-provoking ways, and that's exactly what he does here.

While Ryosuke dreams of attending school in the big city, his mother, Otsune, struggles to make ends meet while working at a silk-spinning factory in the rural province of Shinshu. With a desire to advance her son's education and watch him grow up to become a "great man," a familiar Ozu theme emerges: parents will often make great sacrifices for their children to make them happier than themselves, even if they can't financially afford it. These early scenes depicting Otsune embroiled in the factory are critical to setting up what her sacrifice will mean for her son.

Bordwell states: "After the Meiji era, most textile industries relied heavily on female labor, bought or contracted at low rates and maintained in grim conditions…the sheer decision to depict such an important part of the rural economy was apparently breaking a tacit convention about what subject matter could be shown on the screen."

Translation: Otsune's soul-crushing factory labor not only sets up the family's desperate financial situation, it paves way for a story about sacrifice to emerge in relation to the high expectations parents have for their children.

Where Ozu begins to really uncover the complexity of the story is in the details of Ryosuke's adult life in the city. When his mother pays a surprise visit to the now grown man living in Tokyo, you almost get a Second Coming of Christ feeling as she exacts a toll of accountability on how well her son has lived up to the promise he made as a child: "Just watch me, Ma, I'll become a great man." This is where things get awkward. Ryosuke is married and has a brand new child, which is laudable by some standards, but his college degree has provided unrewarding, low-paying work as a night-school teacher. He’s also housed on the outskirts of Tokyo's desolate wastelands next to the garbage burners taken straight from AN INN IN TOKYO (1935).

"Ugly Tokyo," says Bordwell, "is the correlative of the failure of Meiji aspirations." Has the mother wasted her sacrifice for this, to see her only son lead a ramshackle existence? Is this what repayment looks like in the new Japan? The position of children disappointing their parents is an interesting role-reversal from, say, I WAS BORN, BUT (1932) where parents, contrariwise, are seen disappointing their children. Ozu seems to be balancing the scales in this film, suggesting that in a period of reconstruction, industrial expansion and misguided ideology, children and parents will always fall short of expectations.

In the film's most stunning sequence, Ryosuke and his mother are seen framed against a swampland of factories belching infernal smoke and cluttered debris. It's an entirely different vision of what you would think Tokyo would look like under the promise of progress, but there's a specific purpose in the framing, even the choice of costume design, that is totally worth our attention. Look at what these characters are wearing. Ryosuke is wearing a Western-style business suit, his mother a humble kimono. These are the players of old and new Japan taking in the ephemerality of a country that was slowly dissolving before their very eyes.

Through both industrial expansion and the great Kanto quake, says Bordwell, "Tokyo lost most of the buildings that linked it to its past. Now it was rebuilt, and in the late 1920s massive urban renewal created major thoroughfares and modern apartment buildings. Landmarks vanished. The new Tokyo was a monument to mutability." We see this "monument of mutability," or "floating world," as he calls it, in the very deserted framing when Ryosuke confesses his financial failure to his mother. The moment expresses how ephemerality wasn’t a thing to take pleasure in, but bemoaned, as it represented a genuine expression of loss felt by the rapid changes wrought by modernization. It's a moment inspired from the Zen tradition of recognizing the impermanence of the present, saying goodbye to the nostalgia of the past while fearing the innovation of the future.

Kafu Nagai wrote about this in 1909: "Before industrialization, before the streetcar tracks were laid, the beauty of the city was being destroyed, and that sad, lonely vista beyond the river still let one taste of decline and decay and an indescribably pure and harmonious beauty."

In one simple moment, Ozu conveys the entirety of the brokenness of Meiji promises.

It isn't entirely fair to say that Otsune is fully disappointed in her son. To some degree yes, she is, but as the story unravels its sophisticated web we start to see a new picture emerge that dissects the measure of one's greatness in relation to what a parent would love to see fulfilled in their child. I won't go into explicit spoilers, but there's clearly a message targeted at societal standards of financial greatness versus internal levels of moral greatness that Ozu is critiquing. Money doesn't give your life value. Great car, great house, that's all commodity fetishism. Otsune is initially hoodwinked by this consumer good philosophy of what her son is expected to have as a result of her sacrifice, but it's not until her son demonstrates a true act of moral compassion where she realizes she has indeed raised a "great man."

And so the ending is ambiguously fraught in two ways. Ostune, yes, holds silent disappointment in desiring "more" for her son to compensate for how hard she's worked to give him everything. She's also impressed by his ethical compass to promote the well being of others. Modernity has spoiled the desire for greatness only to the extent that money could have corrupted Ryosuke had he rolled the dice differently (heard when Ostune tells him, "I'm glad you didn't become rich.") Tradition has preserved Ryosuke's greatness to the extent he hasn't fully succumbed to modernity's pull, but allows himself to keep his youthful vow he made to his mother in the beginning.

This is a masterful film that I could keep gushing about, but I digress. Easily one of Ozu’s best, with layers myriad, characters complex, and a story so profoundly moving and reflective. Definitely falls into the must-see Ozu category for anyone interested in exploring his work.