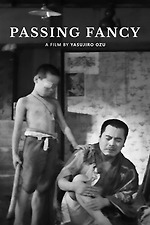 In Ozu's early work, dramatic crises centered on things like unemployment, the inability to pay a medical bill, the failure in job advancement, and the humor of believing higher education would save you in 1930s Japan. These were lighthearted comedies led by college students and frustrated salarymen, where the focus always showed people losing to a fragile economy that couldn't support them in their attempt to get ahead.

As Ozu matured in his career, tales of unemployment and trivial pranks slowly moved towards tales of fractured family relations, specifically estranged fathers and sons.

PASSING FANCY is mired somewhere in between this gradual transition. The focus is primarily centered on the conflict between a father and his son but Ozu is still reaching back to Hollywood comedy and gesticulation to portray working class despair, yielding an amusing first half and a near-tragic second half. The film is at its strongest when spotlighting the humorous, if not strained, father-son relationship. Once again, this particular father, because he's an uneducated drunkard, is unable to live up to his son's expectations (a theme also explored earlier in TOKYO CHORUS and I WAS BORN, BUT). The son is bullied for it and resents his father because of it. The mother is also noticeably absent from the family, perhaps due to an untimely death or separation, which makes the father's alcoholism and unusual pining for a much younger woman all the more understandable.

Plotlines intertwine between the father's unlikely ideal romance and the son's embarrassment of his father's behavior. It all culminates towards an abusive scolding match between father and son, and later climaxes with the son getting seriously ill and the father (as typical in previous Ozu films) having a difficult time finding the cash to pay for hospital bills. It's interesting to see Ozu's reoccurring motif of characters desperately needing money play out in this setting.

Everyone in this story is interlocked by poverty, living a hand-to-mouth existence, and yet in times of crises they still rally around each other, give aid, and insist on helping raise the needed money where they have none. Most touching is the ending. The father, presented with an opportunity to work abroad while leaving his son behind, chooses instead a future of hardship and poverty by remaining with his son. The message is clear: the choice to be with family, despite how difficult, dysfunctional and destitute, is better than the choice to be without family. We may not always be in harmony with our family, but the effort to have some semblance of it is worth trying.