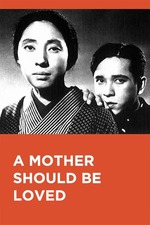 A Mother Should Be Loved

I'm finding it more and more difficult to write about Ozu's films without getting needled into the plot, which I find make the most boring reviews. Don't just rehash the plot. Snooze! Help me understand what I just watched. Give me cultural context. Give me tools to winnow and interpret. Enlighten the subtext and move beyond the surface of things. That said, Ozu's films are almost coming to the point where you have to squeeze out an ample amount of story points just to see how intricate and exquisite the design is, which in turn will help illuminate all the misunderstandings, bitter arguments, and breakdowns that surround his strained family relations.

Let me try to grind this one to the bone without losing the muscle.

A family loses its patriarch. A mother is left to raise her two fatherless children. The eldest son later uncovers a secret about his mother that feels on par with Mike Leigh's 1996 volcanic masterpiece.

Sadao, the elder brother, is trying to come to terms with who his mother really is, while Kosaku, the younger brother, struggles to understand why his mother always favored Sadao while growing up. Biology is key here –the makeup of one's identity. If a person's origin story is built on an honest lie, there’s still an ambiguous kind of loss felt for all parties involved. The reasons are interesting in this story. Sadao's mother may have kept him ignorant of his true parentage in order to make him feel a part of the family, but his discovery of the truth feels like a betrayal made worse only by his extended feelings of biological rejection and abandonment. When Kosaku learns he shares a different mother from Sadao, he's racked with shame over how he's misinterpreted and treated his brother.

At the center of all this bitterness and misunderstanding are two sons utterly confused by the love of their mother. For Sadao, his mother's love was a means to spoil and privilege him, when in reality it was meant to make him feel as her own flesh and blood. For Kosaku, his mother's love was always illogically partisan and pointed at the eldest, when in reality it meant that a real mother doesn't sanitize her nurturing when it comes to a natural son. Strangers get the benefit of the doubt, which is of itself a contradictory position for the mother to find herself in given her aims.

The mother, you see, is caught in the crossfire of all these distorted judgments, and it is her imperfect attempt at playing both birth and surrogate mother simultaneously that gives the story such complex, conflicting impulses. The irony? A mother is still a mother irrespective of biology. Motherhood is endowed through the very care-taking, self-sacrificing, soul-nourishing act of raising a child, not necessarily through the sexual function that brought the child into existence. Ozu's script is attentive to the nuances and challenges of motherhood, which is why it ultimately favors the reading of its title.