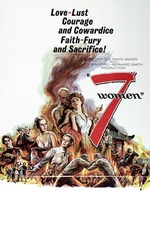 Something completely different for Ford! With his final film Ford showed that he had some true teeth. While it shares a lot of the same elements of his Westerns this movie is far more biting. As the title implies, 7 women live in a mission in China under threat of invasion by a local violent rebel. Perhaps because its written by a women, but this is one of the few Ford movies I've seen that doesn't feature misogyny prominently. Instead you get Anne Bancroft as an incredibly strong, independent and extremely capable doctor who goes and shakes up the religiously strict mission run by a prudish women. It almost seems to be arguing with some of Fords past work, that high morality isn't about your past, your words or your culture, but about your deeds. Yes, there is still a lot of racism at play here, but it was refreshing to get such a strong character out of Ford who isn't just at the service of a man. What a way to go out.