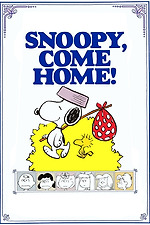 A dog dish worn as a hat will always be tres chic.

A few weeks ago I revisited A Boy Named Charlie Brown after having not viewed it in at least 30 years; this seemed like the right time to do the same with the second in this four film series... one that I had faint memories of being the saddest. For me personally it wasn't brutal or punishing despite its plot being Snoopy & a debuting Woodstock visiting his original owner-a young girl named Lila-in the hospital w/ an unidentified illness that may be some sort of cancer (even if I'll forever have mournful memories of visiting a loved one in a hospital as that had to be done on many days last year); it still is the most melancholy as all the main characters are devastated at the thought of Snoop possibly returning to Lila permanently.

For me this was pretty good overall; it has some interesting interludes such as a carnival visit and beach antics which weren't distracting from the main story. Snoopy started to feel unwanted at home so there is motivation for him to ditch Charlie Brown for good... and he not only felt like a blockhead due to his attitude towards his dog, but was devastated at the thought of losing Snoopy. Don't worry, there are still laughs to be had throughout, moments that will delight the young ones (that's for those reading this that have small children; that said, who knows how they'll react to the sad scenes) and the early 70's light pop/rock soundtrack also helped.

I had no memory of several elements: that includes the subplot of Snoopy experiencing discrimination as various buildings and modes of transportation don't allow dogs, Thurl Ravenscroft singing a ditty about there being “No Dogs Allowed”, or Snoopy and Peppermint Patty being BFF's to the point that they have “dates” on the beach. Peculiar, but I won't look too deeply into that.