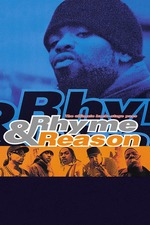 A pretty decent survey of 1990s hip-hop culture: nothing digs very deep, but the breadth of the world of hip-hop is covered almost to a fault: a little history here, a little cultural exploration there. It covers violence, sex, money, police, family, race, and other topics in an almost by-numbers, organized way.

The neat thing about this movie was seeing the mid-'90s face of rap music before it turned into mindless, lockstep, staccato stripper-rap garbage. It's almost like watching the party that is just winding up right before the lights finally go out. The filmmakers talk to the entire gamut of MCs, which is refreshing, and makes up for its lack of comprehension.

The rap community, we find, has fun, yet takes itself very seriously -- probably way too seriously -- and it never stays on one topic or artists too long. (In other words, it doesn't commit the unforgivable sin that Brian Robbins's godawful hip-hop documentary, "The Show," does. This blows that pile of crap out of the water.) "Rhyme & Reason" is an engaging hip hop documentary for the novice.