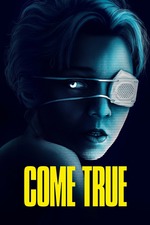 This was a frustrating experience.

I love the quick intro to Sarah's situation, and the whole sleep study setup (and the retro Shriekback synthetic shakuhachi, ha). Some of the visual design, with the vast empty interiors and antiseptic colors, is quite attractive. But since everyone in the movie has a smartphone, while I love the look of analog video monitors, it's just ludicrous to have scientific equipment sporting vintage analog displays.

It would help if filmmakers resisted the temptation of explaining the central concept. Unless it's pretty sublime (which it isn't here), identifying it as "a shadow with eyes" (!) that's some kind of primal archetype just makes it sound unbearably cheesy. But this totally lost me when Sarah suddenly changes her mind about Riff being a creepy stalker, and sleeps with him. Later she watches Riff's romantic dreams on an analog monitor while a cheesy pop song plays on the soundtrack. Ouch. And it only plods on heavily till the final bathroom mirror scene.

The first 30-40 minutes are worth watching. Then I don't know what happened.