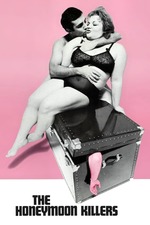 Not the sensationalized B-movie it appears to be, though the low-budget seediness makes it all the more unnerving. Which isn’t to say The Honeymoon Killers looks cheap or even inelegant. On the contrary, writer/director Leonard Kastle (in his sole film credit!) is remarkably assured both visually and as a storyteller. The stark lighting and grainy B&W photography bring a strange beauty to the depravity: see the extended close-up on a victim’s eyes as her killers discuss what to do with her, or the underwater shots of Martha nearly drowning herself for attention. How much credit is due to Kastle or to cinematographer Oliver Wood (who would go on to shoot numerous big-budget action films and comedies), I can’t say. But surely Kastle knew what he was doing with the film’s chillingly exacting approach to a famous murder spree.

For such lurid material, The Honeymoon Killers unfolds with a bleak matter-of-factness more suited to today’s true crime genre than horror. The film— like Shirley Stoler’s uninflected performance— neither mocks nor tries to garner sympathy for the chocolate-eating Martha Beck. Her petulance and self-absorbed disregard for others is never analyzed or explained away; she merely lays the banal groundwork for things to methodically spin out of control. That makes her practically tender final moments, alone after a purposeful act of self-sabotage, almost bizarrely moving.

I could do without some of the musical stings, and a few supporting performances are comparatively over-the-top (though they bring a credible neediness that helps explain how they could be so easily targeted and tricked). But even the minor bumps make this story of off-the-grid desperation and violence that much more uncanny. Kastle may never have found another film project he could (or wanted to) get off the ground, though he remained a prolific composer of music and operas. Judging from this one-off gut punch, we’re the ones missing out.