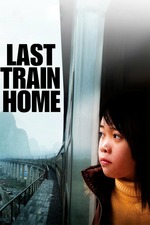 This documentary puts us in the shoes of the human beings behind "made in China." It's a universal story, the generation gap, this one set against a backdrop of the world's largest human migration: 130 million migrant workers, who have moved from the countryside to seek work in the city in factories, go home once a year for Chinese New Year. Most of us in the west will never get as deep into China as this film takes us, even if we visit that land. It can seem as wondrous as a foreign planet, and indeed it's as gorgeous and mysterious as one, sometimes startlingly verdant in the mist. The train wends through awesome mountains. And then we see the people are just like us. Qin, the modern youth, fights with her more traditional parents, who she feels abandoned her but who left her to make a better life. She wants to get out of her wall town and make it in the big city, like kids everywhere. There's a scene so raw you'll be startled the filmmakers left it in. Consider seeing this film.