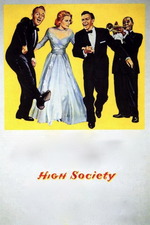 All Walters had to do was aim the camera and keep it in focus and he was going to get something good, what with three of the greatest musicians in American musical history on hand: Bing Crosby, Louis Armstrong, and Frank Sinatra, all innovative or even revolutionary in their own way. And pointing the camera was pretty much all the director did with this musical remake of The Philadelphia Story, but I still had a great time with it. The great woman of the '50s, Grace Kelly, is here as well. If we were just rating the soundtrack, this would get four or five stars, what with Cole Porter's songs put to settings by Nelson Riddle and Conrad Salinger, songs like "Who Wants to Be a Millionaire?," "You're Sensational," and "I Love You, Samantha." The Newport setting allows the movie to reference the Newport Jazz Festival and bring in Armstrong and band. To hear Bing belt out "Now You Has Jazz" backed by Armstrong (love how Crosby introduces the band by name) is to hear "rock and roll" evoked in the lyrics and even in the spirit, if not the letter, of the music, right about the time the rock 'n' rollers were about to come along and disrupt the music and the culture in much the way these three men had in their day.