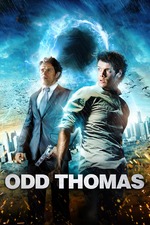 "I am not afraid of Death. Course, I'm not ready to go on a date with him, either."

So, this was definitely a film.

I'll be honest when I say I didn't know what to expect, but it surely wasn't this: a very mixed bag of a random assortment of stuff.

I initially checked this movie out because I saw it had Willem Dafoe and Shuler Hensley in the cast, which are two actors I greatly respect. While their characters are very important, they sadly don't have a whole lot of screentime. BUT! The time they get is pretty entertaining.

Hensley doesn't have a word of dialogue (which is sad for me, personally, because I love hearing how his voice changes with his roles), but this does give him the opportunity to have this really campy and fun physical role where he's stomping all over the place and making weird faces and it's just a whole lot of fun.

Willem Dafoe's character has this ongoing gag where whenever he's trying to bang his wife, Anton Yelchin interrupts him with some new bat-shit crazy news. It's actually kinda funny and has some charm with showing how close Dafoe and Yelchin's characters are.

Speaking of Yelchin, he was a nice surprise!! I wasn't expecting him, and I actually really liked his stuff (his voicework, mostly). I hope he's okay, wherever he is.

Addison Timlin, while not always landing with her delivery, was nice as well!! Her character's relationship with Yelchin's was extremely cute and she had a nice smile!

And finally, the plot was really cool and, I think, a very interesting premise for a story!! And I actually want to check out the original Dean Koontz novel it was based on!!

The script is a mess. It sounds like it's trying to be smart, but comes off as semi-pretentious and stupid. There were so many moments in the film where I thought it sounded like a poorly written self-insert fan fiction as the character of Odd Thomas is badass, extremely smart, has a sexy girlfriend, is friends with literally everybody in town and is different from everyone else and therefore the most important person on the planet.

The CGI was horrendous, and the editing was weirdly jarring in places (especially in "flashback" scenes). And there was a couple shots that I swear were stock videos.

The voiceover got pretty annoying pretty quick, as it constantly had to explain everything to us. This film didn't let me think the entire 93 minute run time. Not that I needed to, because I could guess each plot twist from 50 miles away.

All around, it was alright (and I liked the acting!), but I'm not sure I'd ever watch this film again.